If there is a moment that the history of film changed forever, it was on 25 May 1977 when George Lucas released Star Wars (later renamed A New Hope in 1981). It set new standards in visual effects and was notable for embracing the traditional "Hero's Journey" myth-arc as theorised by Joseph Campbell, rejecting the more morally murky and conflicted protagonists that had dominated 1970s cinema. Arguably every effects-heavy action film of the last forty years owes its existence to Star Wars, and it remains one of the better films of its genre. 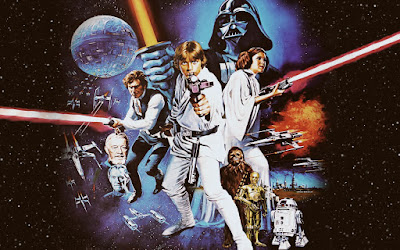 It's a difficult film for me to analyse fairly given I've grown up watching and rewatching it to the point where I could probably quote the entire film. However, it's been a few years since I last saw it and the question arises of if it can really stand up.

The answer is yes, with some reservations. It's a very entertaining film which embraces a simple, straightforward narrative and structure. Unlike George Lucas's inept prequels, Episode IV establishes character, sets out the stakes and introduces its primary locations with a brisk, breezy and narratively economical opening that is a far cry from the interminable CGI and baffling waffle of the later movies. This sparseness was driven by budget concerns - Star Wars was a fairly low-budget movie even for the time given its scope and what it was trying to do - but really helps give the film momentum.

The movie also benefits from a much more collaborative spirit. Whilst Lucas is the screenwriter, director and producer, he also had more supervision and help on this project. Gary Kurtz, noted as one of the few people who could tell Lucas "No" when he came up with a poor idea, serves as producer and the screenplay received an uncredited-but-essential polish from American Graffiti writers Gloria Katz and Willard Huyck. Katz and Huyck added most of the film's wit and banter and helped mould the lines into something more naturalistic that fitted in the setting better. Fellow director Brian De Palma also helped Lucas by rewriting the opening crawl into something comprehensible. This results in a much more relaxed screenplay which includes enough exposition to make sure the audience knows what is going on but never descends into technobabble or over-explaining anything.

The performances are excellent. Alec Guinness and Peter Cushing bring formidable experience and charisma to the film. Cushing, in particular, gives Grand Moff Tarkin presence and menace despite having no real motivation or backstory. This actually works well, with Tarkin presented as a bureaucratic, murderously official military officer who is formidably loyal to the Emperor and seemingly even has Vader's respect. There's a star-making turn from Harrison Ford, a spirited performance from Carrie Fisher that overcomes some diabolical lines (and a coming-and-going English accent) and a satisfyingly grumpy performance by Mark Hamill, who convinces as the young man torn between several destinies but who hasn't totally outgrown teenage selfishness just yet, until he finds inspiration in figures like Obi-Wan.

Yes, the film does have flaws. It's aged pretty well considering work on it now started forty years ago, but the budgetary constraints are a lot more obvious with time. It's easily the least-epic film of the seven so far, but this pared-down approach actually serves it pretty well. Most of the effects have held up, with only the lightsabres really feeling out of place with the later movies. The biggest issue is that the Special Edition additions, which add vast crowds and snazzy CGI to places like Mos Eisley, stick out like a horrible sore thumb compared to a sparser feeling elsewhere in the movie. And yes, there are a couple of clunky lines and a few logic issues, such as Luke getting enormously attached to Obi-Wan Kenobi given he knows him for about a day and Chewbacca and Wedge not being honoured at the end of the film with everyone else.

But these issues can be borne for the verve and economy of the storytelling, the relaxed and intriguing worldbuilding (assuming you're coming at this as the first film in the saga, which is really the best approach to the series), the banter and chemistry between the three leads, the humour beats which still work really well and the utterly stunning design work, musical score and space battles.

It definitely changed BLOCKBUSTER or action movies...but "2001: A Space Odyssey" was leagues ahead of tech at the time that came out - approx 9 years before "Star Wars". "2001" was a more important science fiction film. But it is like saying apples to oranges: you don't throw on "2001" to watch a space battle.

I rewatched it a few days ago and I gotta say, this movie is really overrated by critics and audiences alike. I know, I know, it began the greatest and most popular sci-fi franchise ever, had enormous influence on later film making, etc. But once I got past that, I just couldn't fail to notice bad acting on pretty much everyone's part except Harrison Ford's, clunky dialogue, some silly exposition, and loads of plot holes.

Maybe it's just me, but A New Hope is far from excellent.