Six months have passed since a large number of deceased people enigmatically returned to life in a remote French mountain town, followed by part of the town flooding. Most of the population has fled and the army has arrived to investigate what's going on, but the local population is reluctant to help them. Meanwhile, the Returned (and a few living allies) are living in a suburb cut off from the rest of the town by floodwaters...but a second batch of Returned have arrived, including some of a more hostile and murderous bent. 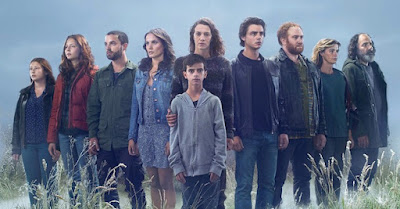 The first season of Les Revenants aired on Canal+ in France in 2012. After a belated three-year delay, during which the series won over cult audiences in Britain and America via broadcasts on Channel 4 and Sundance, its second season has arrived. Surprisingly, as the showrunner indicated that they had a three-year plan during production of the first season, the final episode of the season does wrap up the story and most of the characters pretty well. That certainly doesn't mean everything is answered, but it does give a sense of closure in case the show does not return.

The second season comprises sequences sent in the present day, six months after the flood, and flashbacks to several points in the past. Most of these surround the collapse of the local dam in 1977 and the subsequent inundation that killed more than a hundred people. Unexpectedly for such a low-key show, at one point we actually see the accident take place in full force, with some astonishing CGI shots of the destruction. It's a moment that wrongfoots the audience in all the right ways, and more follow.

The second season is bleaker and more paranoid than the first. The army and a newly-arrived engineer are asking questions that none of the locals want to answer for fear of sounding like lunatics, or endangering their loved ones (living or dead). No-one is sure who to trust, especially as the floodwaters have broken up several families. However, the Returned themselves are becoming divided. The return of Milan, Serge and Toni's murderous and deluded father, causes significant problems, as does the birth of Nathan, the son of revenant Simon and the still-living Adele. Julie has dedicated herself to looking after the enigmatic child Victor, but when his mother and brother both return as well she finds herself shut out of his life.

There are many stories in the second season, but at its core it is the story of Victory, the unusual child with the terrifying thousand-yard stare, and Julie, the bruised, battered and defiant survivor of one of Serge's serial killer sprees. Julie is further devastated by the (apparent) loss of her lover Laure during the events of the Season 1 finale, but she tries to find redemption in Victor. When that is taken away, she is plunged into despair, but recovers thanks to a friendly nurse and an old man in the hospital who holds the key to Victor's past.

It's at this point that the series does what you'd never expect it to do: it unlocks the past and gives us lengthy explanations and flashbacks showing Victor's life before, during and after the flood. This rewriting of the backstory we learned in the first season could risk feeling forced or a retcon, but works beautifully. It both explains why the dead are coming back (if not quite how) and how the situation can be remedied, and what the consequences might be if it isn't fixed. The young Swann Nambotin has to do a lot of dramatic and emotional heavy-lifting to make these pivotal scenes and he delivers in spades. Céline Sallette's performance as Julie is heartbreaking, and remarkable as she has to portray despair and emotional numbness but still be compelling to watch.

Elsewhere the show falters a little bit, apparently having issues with returning castmembers: I get the impression in early episodes that they thought they could get Alix Poisson back later on as Laure and then realised they couldn't, so killed her offscreen, which doesn't really track with Julie's comments in early episodes. Other major characters from the first season also have limited screentime in the second (such as brothers Toni and Serge). But otherwise the show handles its cast extremely well, particularly the story of the twin sisters Camille and Lena which provided us with the emotional core of the first season and pays off well here. The only characters who do feel really short-changed are Adele and Simon, particularly the completely baffling ending to their story which feels like it goes against what is established elsewhere in the series.

It wouldn't be Les Revenants if characters sat down and gave us a long explanation about what is going on, and they don't here. But by the end of the second season enough information is given to put together a reasonable conclusion about what has happened and how it has been resolved...and how it might happen again, as a couple of minor plot threads are left dangling for a future third season. If that does happen it will be a very different show, and at the moment feels completely optional.

The second season of Les Revenants (****½) is wonderfully well-written, fantastically acted and beautifully shot, complete with stunning cinematography and an even better musical score than the first year, again by Scottish band Mogwai. The series will be released in the UK on 11 January 2016 (DVD, Blu-Ray) and is available in the USA now on Amazon On-Demand.
Posted by Adam Whitehead at 18:41