What do you do when you've made the most successful movie in the history of movies, made a huge amount of money and are then asked to follow up on it? If you're smart, you hire the best writers in the business and get an off-beat, idiosyncratic director to make the film and bring a different sensibility to it. In 1978, when starting pre-production on his sequel to the original Star Wars, George Lucas chose to be smart. He got renowned pulp SF author (and experienced screenwriter) Leigh Brackett to write the script and, when she sadly passed away, hired a skilled up-and-comer named Lawrence Kasdan to polish her draft. He also asked Irvin Kershner to direct the movie when he realised that just financing and retaining creative control of the movie was going to be a full-time job. 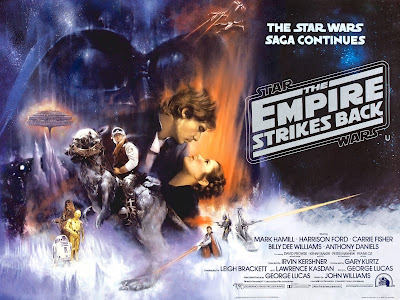 With Lucas mostly hands-off in production (returning to help with the Dagobah scenes but leaving Kershner and Gary Kurtz to oversee production elsewhere), the result was the least-typically-made of the Star Wars movies. It was by far the most collaborative, with the actors invited to help brainstorm ideas and alterations to the script. This was particularly important for Carrie Fisher and Harrison Ford to sell the romance between the Leia and Han Solo that had to rely on the implication of a lot of things having happened off-camera in the gap between the two movies. The fact they manage to sell the romance and make it convincing with very limited screentime is a tribute to the collaborators involved, and a far cry from the dismal failure in Attack of the Clones to have Amidala and Anakin do the same thing.

Elsewhere the film benefits from a counter-intuitive plot and structure. The film opens with what should have been a massive climactic battle and then downscales from there, with much of the film concerned with the attempts of the Millennium Falcon crew to escape from the Imperial Fleet and Luke training in the swamps of Dagobah with Yoda. The film ends with pretty much the good guys losing and things are left on a cliffhanger. It's far cry from the medal-awarding triumphalism of the first movie and one that subverts expectations without coming totally out of left field. The tone and feel of the film has been described as being grimmer than the others, but there's actually quite a lot of humour in the movie. What Empire does the best out of all the films is make the Empire feel like a real, credible threat whilst humanising the characters and making the stakes feel real and the scope larger. It also leaves plot points for the viewer to identify and interpret rather than over-explaining things. The significance of the Dark Side cave on Dagobah and what it says about Luke is reasonably obvious, but the film still does a good job of leaving it up to the audience to draw their own conclusions.

As always, the design work is incredible, the special effects are excellent and still stand up well (even puppet Yoda looks and feels realer than the CG creature in the prequels) and John Williams delivers what may be the best score out of the six films (although it's a close tie with The Phantom Menace). But what makes The Empire Strikes Back the best of the six films (controversial opinion, I know) is the combination of good writing, great acting from performers heavily invested in their characters and the decision to give the Empire a real sense of menace and competence, even when they don't have a ridiculous superweapon backing them up.

There are some very minor flaws, mostly relegated to the pointless changes made in the Special Edition (particularly Vader's extremely bizarre "returning to the Executor" sequence) and the under-selling of the time that passes in the film. Apparently it took weeks for the Falcon, limping on a backup hyperdrive, to reach Bespin and Luke also spent weeks (if not months) on Dagobah, but neither span of time comes across well in the film. But these are pretty minimal complaints.

The Empire Strikes Back (*****) is available now as part of the complete (but soon not to be) Star Wars Saga box set (UK, USA).
Posted by Adam Whitehead at 15:53