On 28 December 2008 I reviewed the fourth season of The Wire. I recently completed rewatching the season thanks to the recent HD re-release, courtesy of HBO, and here's the original review with some updated thoughts. 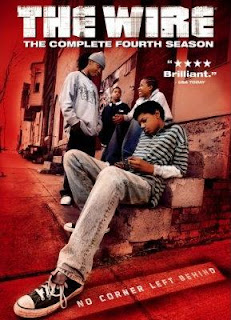 The Wire: Season 4 (*****) is as superbly-written, brilliantly funny, expertly-acted and stomach-churningly tragic as ever, except possibly even moreso than the first three seasons. If there is a negative point, it's that Season 4 is the most epic and sprawling season to date, and it takes a while for all the disparate storylines to start pulling together. But when they do, the result is the most powerful and gripping final run of episodes yet. Season 4 of The Wire is available on DVD in the UK and USA and also as part of the complete series box set (UK, USA). 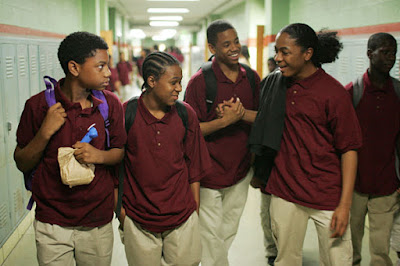 Rewatching the fourth season of The Wire, the question arises: is this merely the greatest season of the show (although it's a close battle with Season 1) or actually the greatest season of any TV show ever made? On a first run it's easy to say no, that the season takes too long to come together in any meaningful way and there are way too few victories. On a rewatch you realise that's the point.

The season is deliberately disjointed: the Major Crimes Unit is deliberately and systematically run into the ground, there's a heavy political storyline with Carcetti running for mayor that feels shut off from what's going on in the street and there's stuff going on in the school that feels disconnected from everything else. Compared to the determined focus and easy-to-determine through-line of the three previous seasons, Season 4 sprawls in all directions.

But the sprawl is an illusion. As Lester Freamon told us in Season 1, "All the pieces matter" and this remains true in the fourth year. Eventually all the little, apparently throwaway moments align with the core storyline of Marlo Stanfield's murderous rise to dominance over the Baltimore underworld impacting on the police, the political system and, most heartbreakingly, in the schools where the young children's best hope for a good life is undermined by an unfeeling system obsessed with statistics over humanity and by street hustlers looking for kids to use as couriers and look-outs. If the season has an emotional core, it's provided by Roland Pryzbylewski, played with tremendous restraint and heart by Jim True-Frost. Prez was the former police officer who shot up a tower block back in Season 1 and idiotically blinded a child for no real reason, but by this season has grown into a more fully-rounded figure. His new role as a teacher in a tough, inner-city school confronts him with astonishing horrors - kids who are clearly emotionally traumatised, abused or mentally disturbed but whom the system refuses to help - but instead of zoning out or quitting like so many others, he tackles the situation head-on and eventually manages to help some (but not all) of his students.

The season is really the story of four of those students - Michael, Dukie, Namond and Randy - and each of their story arcs is told with humanity and skill. The actors are outstanding and the conclusion of each of their story arcs is note-perfect. Only one arguably ends up happy. The ending confronted by Randy is utterly heartbreaking, and the audience sides fully with Detective Carver, formerly a police officer who said he never cared too much and only enjoyed breaking heads, as he finally loses control at the absolute inhumanity and bureaucratic incompetence of the system he works for.

There are so many other moments of emotional perfection, perfect performances, cutting political observation or humour (and for all its reputation as a realistic examination of the modern western city, The Wire can also be the funniest thing on the planet) in the season that it'd be impossible to list them all. Suffice to say, that when the dust settles and the history of the Golden Age of Television is written, this collection of thirteen episodes will almost certainly emerge as its crowning achievement.

The Wire complete series blu-ray set is available now in the UK and USA.
Posted by Adam Whitehead at 13:47

I'm usually the kind of person who watches his tv series and never re-watches, no matter how good the series or movie. I think I'm going to break this unwritten "rule" for the first time. From time to time, I remember many scenes from this series, specially this 4th season. Your review made me decide to rewatch The Wire. :)

My work here is done!

The moment when Landsman breaks his own code of indifference and cynicism to give a moment of compassion to Bubbles is stunning. And I will never get over the tragedy of Dukie (although that doesn't play out fully until S5).

Having said that, and agreeing that The Wire is probably the best tv I've seen and this season is a masterpiece, the story still gives women short shrift on the whole (this season is maybe best for women because it deals with the school system). It is a shame but one that is typical of how big stories are told in our culture.

I think season 4 is a great work of art but as a story, I find season 1 (and the season 1-3 flow) to be better from a story viewpoint.

There is an almost nihilistic fatalism to season 4, which is realistic in a way; showing that bureaucratic forces care only for their own survival. But realism makes for unsatisfying stories, at least in this case.

Still, it's embarrassingly well-done and if I prefer the story of seasons 1-3, it doesn't mean season 4 is bad, just a different kind of art.