How do you go about resurrecting the most iconic movie series of all time, especially after its reputation has been tarnished by prequel films of, at best, mixed quality? It's a question that was confronted by a video game company called BioWare in 2003 when they made a game called Knight of the Old Republic. Their solution was to go back to basics, gathering a crew made up of new characters but riffing off familiar archetypes, visiting a couple of familiar locations and then fighting a strangely familiar final battle on a massive space station, but with a different context and their own unique, killer twist. 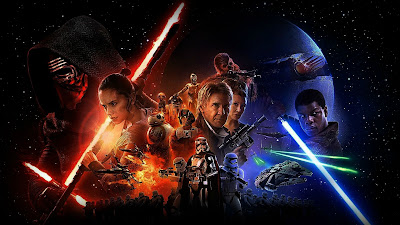 Whether J.J. Abrams ever played Knights of the Old Republic is unknown, but he certainly takes the same approach when it comes to resurrecting Star Wars. The Force Awakens is a film that cribs liberally from the original trilogy (especially A New Hope) whilst also establishing its own new, core cast of heroes and villains. This is a movie that sees the generational torch being passed from Luke, Leia and Han to a new trio of heroes made up of Finn, Rey and Poe Dameron, along with plucky helper droid BB-8, and does so with aplomb.

From the opening crawl - which doesn't mention tax disputes or politics - the creators of this movie are on high alert not to repeat the mistakes of the past. Character motivations are established firmly and communicated to the audience effectively. The villains and heroes are clearly delineated, action sequences are heavy on CGI but filmed with long, graceful shots which allow you to follow what's going on, and the music is evocative throughout. There are weaknesses, niggles and problems, some of them more pressing than others, but in the most general terms The Force Awakens is easily the best Star Wars movie since Return of the Jedi, both being a highly enjoyable stand-alone space opera film but also one that lays essential groundwork to be built on in the following movies.

The acting is strong across the board. The toughest job falls to Daisy Ridley and John Boyega as our new main characters, Rey and Finn, and both deliver credible, compelling performances (Ridley, in particular, not just steps up to the mark but smashes through it in several key moments). Oscar Isaac is also excellent as Poe Dameron, giving us a new, roguish pilot character but also one who is a patriot and professional soldier. Harrison Ford also excels as the older, more haunted and more conflicted Han Solo, driving the film on with his still-formidable charisma. On the villain side, Adam Driver takes a very different tack to Kylo Ren than some of the Dark Side antagonists we've seen in the past, one who is as nervous and occasionally uncomfortable in his training in evil as Luke was in training to be a Jedi. This gives Ren immense humanity and makes him an altogether more interesting (and dangerously unpredictable) villain. Andy Serkis gives a mocap performance as Supreme Leader Snoke which is downright weird and surreal, injecting a near-David Lynch's Dune level of bizarrity into what is a mostly straightforward action film. We'll presumably learn more about Snoke in future movies, but the hints we have here are of a rather different kind of evil than the Emperor or the Sith.

On the more disappointing side of things, Domhnall Gleeson is a rather one-note villain as the First Order's military commander, General Hux (I get the impression he was channelling Peter Cushing as Grand Moff Tarkin and falling rather short) and Gwendoline Christie's Captain Phasma is extremely under-utilised.

On the production side, the film has a lot of excellent design work, some phenomenal musical cues from John Williams and some satisfying lightsabre duels. If the original trilogy's lacked scale and the prequel trilogy's relied too much on CG fakery, The Force Awakens's duels are earthier, more grounded and feel like they hurt a lot more. The space and aerial battles are also excellent: one long shot of an X-wing gunning down a series of TIE Fighters outclasses every dogfight in the prequel trilogy in the space of a few seconds.

As mentioned earlier, there are issues. Star Wars has always had a flexible attitude towards scientific realism (i.e. pretty much ignoring it) but there are couple of moments where The Force Awakens seemingly abandons the most basic laws of physics and plausibility. These actually stand out because of the restraint and greater nods at realism elsewhere. There's also a couple of moments when the movie goes too far in its quest to avoid exposition. The film does a great job (as the original trilogy did and the prequels notably did not) of allowing audiences to fill in the blanks in the backstory themselves, but in one scene its refusal to explain what's happening led to some extreme confusion amongst the audience and made them think something far more apocalyptic had happened than actually had. There was also not a lot of explanation of the relationships between the Empire, the First Order, the Rebel Alliance, the New Republic and the Resistance. Some of this should be filled in upcoming films, but there was a bit too much left unexplained at this point.

Overall, however, The Force Awakens (****) does exactly what is asked of it. It delivers an entertaining (but not disposable) two hours of entertainment, fun, humour and occasional, deep character exploration. There's a couple of moments of real pathos and tragedy in this movie which I wasn't expecting, moments of humanity and a desire to wrong-foot and surprise the audience but always in a manner that is consistent with what has gone before. It's also, by far, J.J. Abrams's best movie. The film is on general release right now.
Posted by Adam Whitehead at 00:29

Hi! Thanks for this review.

I watched the movie yesterday and I agree with what you've written.

However, I'd be grateful if you could be more specific with regards to the flaws of the movie. I understand you might have wanted to not say much to avoid spoiling the movie.

What was the non-apocalyptic scene you mentioned?

I thought Kylo Ren and Rey were the absolute highlights of the movie.

Thanks for the review Adam. Well written and treading that fine line between spoilers and giving useful information. It achieved this far better than many newspapers where I stopped reading halfway through.

Thanks for the review. What I didn't get: Extreme confusion in the audience? When? Where? What scene do you mean? There was no confusion in my screening. ;-)

Really flawed movie, lot to like, but overall not that great. A lot of hype right now, lot of uncritical reviews out there. I really think that a few years from now this won’t be considered particularly better than the prequels.

Excellent review. I'd like you to do a more spoilery analysis as well.

What was the part that led to "extreme confusion"?

The random Republic system being blown up. Pretty much everyone in my screening was convinced it was Coruscant, and missed the reference later on that confirmed it wasn't.