A HISTORY OF EPIC FANTASY - The Book Version!

I've had quite a few people asking me if there will be a book version of the History of Epic Fantasy articles. I am pleased to say that yes, there will be. This will also not be just the blog articles collected into a .pdf to make a quick buck, but will be a thorough rewriting and re-editing of the entire series. The book version will also be larger and feature more content on authors, themes, series and ideas. 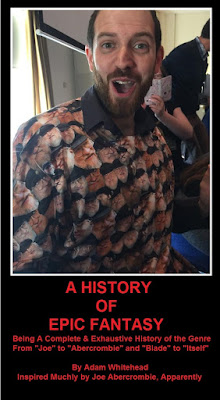 No, this still won't be the cover.

The book version will follow the blog format of looking at the history of the genre through mainly a chronological perspective, with some asides into thematic areas. There'll also be a look at other areas of fantasy and how that relates to the epic field. There'll be more space for more authors, so writers I had to leave out of the blog version for time reasons will get coverage, such as Peter V. Brett, L.E. Modesitt Jnr., Elizabeth Moon and so on.

The book version is being shopped around by my agent (Ian Drury at Sheil Land, just in case any publishers out there are interested) but if we get no interest from that quarter, I will certainly be self-publishing. The interest from readers and even quite a few fantasy authors in this project has certainly been high, and resulted in a massive explosion of hits (tens of thousands of them over the same period last year) for the blog, not to mention the fact that epic fantasy has never been bigger than now, so I'm confident there is commercial potential in the idea.

If anyone has any ideas for the book version, they will be gratefully received. I've had a suggestion that we could look at including more and maybe iconic artwork from fantasy covers and series. Unfortunately, the licensing fees for this would likely be prohibitive, but if a professional publisher picks up the book then it might be possible to do something alone those lines.

I've also had people requesting a science fiction version (although in that case a "History of Space Opera" might be the equivalent). This would certainly be fun, but there are already quite a few good such books out there. Although older, Trillion Year Spree by Brian Aldiss and David Wingrove is worth a look, as is the 1995 SF: The Illustrated Encyclopedia by John Clute, which arranges the history of SF into handy chronological charts, thematic essays and profiles of hundreds of prominent authors in the field. In fact, one of the inspirations for the History of Epic Fantasy series was the baffling lack of any such comparative material for the epic fantasy field, despite its much greater sales and popularity. The Encyclopedia of Science Fiction is certainly a resource everyone should be using for SF, although that is not a linear, chronological look at the field.

I would also like to take this opportunity to extend my thanks to everyone who read and commented on the article series. Your feedback has been appreciated, and has inspired some of the changes that will go into the book version.
Posted by Adam Whitehead at 13:52

Well done; a fine project which deserves the Full Monty treatment. I'll be in line for a signed copy....

Perhaps a Kickstarter project? I don't know much about how those work but I, for one, would be happy to contribute. I've greatly enjoyed the blog series.

Fantastic! Honestly, I'd be interested even if it were just a self-pub ebook collection of the blog posts. To hear it will be more has me ready to pre-order ASAP!

Bravo, Adam! Well done. This has been an excellent, comprehensive, enjoyable series of articles.

God speed with the project! As a long time reader, I'd be delighted to buy it not only for the value it offers, but also as a way of professing thanks for the countless articles, reviews and news pieces.


As a suggestion for the book, I'd say you just have to grab the oppertunity to couple the principle of the series so far with another one you touched on previously with your "bestselling fantasy authors of all time" article. That essential part, which I felt was lacking in the blog posts, is data. Some raw numbers shaped into facts. As a fantasy reader, I am sometimes frustrated at a lack of easy access to the most basic meta-data information about the genre - so, for example, when you write that author such-and-such made this-or-that kind of book more popular, some sort of chart tracking numbers to back the claim (number of books published, sales, or any other reasonable metric) would be fantastic. Not only will this add to the value of the information, taking a deeper look at those facts will either lend credence to your claims or make you revise them and write a more accurate book.

I know that kind of research can be extremely difficult and time consuming, and I'm not really 100% sure it is even possible to get accurate information on such matters - but surely you are better positioned than most to try, and including something of the sort could really elevate your book to the next level.

I will buy your book either way - but I sure do hope you'll use the opportunity to make it truly great by incorporating even more thorough research into this aspect of the big picture you have yet to touch upon in the blog posts.

yeah man go for it

Ah, excellent! I'll be buying a copy, you did great work with this series.

Looking forward to it!

If I may suggest to include Brent Weeks, Peter V. Brett, Jim Butcher, Brian Ruckley, Adrian Tchaikovsky, Michael J. Sullivan and Robert V.S. Redick in the book version, that would be awesome!

I'm in for a copy in whatever form it's published. If some authors are interested in your work, I would love to see additional commentary from authors about some of the ideas and themes. Maybe what they were thinking about when they set to writing their own works etc. While it would be cool, it wouldn't put too much effort into the iconic artwork issue. Maybe save that for a special edition after you've sold the first million copies and have the marketing status to negotiate those rights ;)

Good to hear. If no publisher can be found for this book, then they all need to find another line of work. This one looks like a winner all the way. Also I would love to read a sci-fi version of this. Good luck!

Excellent news! I Second Benjamin Thomas' comment to start a Kickstarter campaign if you don't find a publisher. I bet there are many potential backers for such a campaign for a wide range of contributions (count me in). And you're definitely good to go with the "proof of concept" they require.

Thanks for including Elizabeth Moon on the to-do list. She was the only author in my little collection I missed in the blog posts. And you added (quite) a few books/authors to my wish list when I'll visit my favorite American/English book store in Amsterdam next time.

I wonder, just out of curiosity, and maybe this has been answered before, but have you read/watched every single work you mention? (There are some mentions which are not covered in as much detail as others but yet taken into account. I'm only curious about some of the working-process.)

In case you are not answering anonymous questions, the last question about the working process was mine. In any case, amazing work.

May I suggest again a link page to the books on Amazon? Handy for us (I am buying a LOT of books from your list), and some return for you. Every penny counts :)

As a creator, I hate it when people tell me they'll buy a copy. I think it makes them feel like they've already bought the item in question, and they rarely get around to it.

But I'm super excited about the book version, and will absolutely buy it. Thanks for all of your hard work.

I just discovered your blog and my mind blowed away! Your work is really impressive, such detail and dedication! I was wondering what happened with the book. Is it finally out? I do love the Project and I hope this comes a reality.