THE LAST KINGDOM renewed for a second season

The BBC has ordered a second season of The Last Kingdom, their TV drama based on Bernard Cornwell's Saxon Saga of novels. 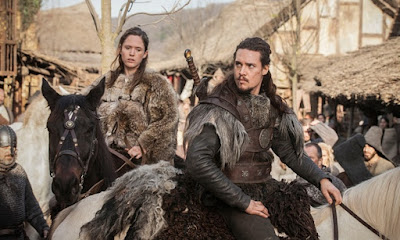 The Last Kingdom has proven to be a successful series, winning critical acclaim and reasonably strong ratings on both sides of the Atlantic. The first season was based on the first two novels in the series (of nine so far), The Last Kingdom and The Pale Horsemen. If the second season is based on the next two novels, The Lords of the North and Sword Song, it will focus on Uhtred's quest to reclaim his homeland as well as widening the scope to new locations, including London.
Posted by Adam Whitehead at 02:51

Very pleased to see this as I really enjoyed the series.

The BBC article suggests a mainly male audience, at least in the UK, which is interesting given that I watched it with my wife and we both enjoyed it. Do you think the focus on Uthred as the main character meant women were less attracted to the show? I know my wife liked this and not GoT because of the blatant nudity in GoT, yet GoT seems to be popular with female audiences.

Love this series! One of the best shows on TV right now

I think it's more the case that the article writer was making lazy assumptions. I've seen a pretty even gender split among people enjoying this show among my friends.

Welcome news. My wife and I both really enjoyed the series and for somewhat different reasons. She was impressed with the story, the drama, the presentation, the lack of graphic sex and the minimization of brutality. I'm a fan of Cornwell and the books and I was impressed with the seriousness and faithfulness the writers, producers and directors showed. Beautifully cast as well.

Loved season 1. Looking forward to watching season 2. Not typically my first choice when I choose a series to watch, though I have enjoyed watching historical type films in the past. Very glad I decided to check it out. Well worth it and truly one of the best series I've watched in a long time. This production is definitely cutting edge with a perfect balance of clash amongst characters, belief systems, etc. Getting antsy for season 2!

I'm female. I've read all the books and I loved the series. I've read Bernard Cornwell's Sharp books too and also the archer series. His writing is not gender specific!