Platige Films and the Sean Daniel Company have confirmed that they are collaborating on an big-screen adaptation of The Witcher short stories and novels by Andrzej Sapkowski. 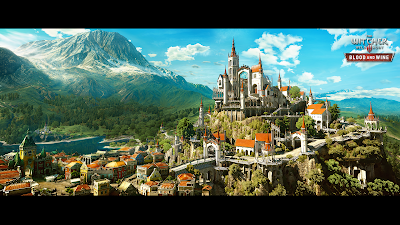 The city of Beauclair, the capital of the French-flavoured nation of Toussaint, in the upcoming Witcher III expansion.

Platige is a Polish company founded in 1997 which has worked in advertising and short film. The Sean Daniel Company is an American production company best-know for its work in The Mummy franchise and the upcoming Ben-Hur remake, as well as working on The Expanse TV series.

The planned Witcher movie will be an adaptation of the short stories 'The Witcher' and 'Lesser Evil' from The Last Wish, the first book featuring the character of Geralt of Rivia. These are fairly low-key stories by epic fantasy standards which will require only a modest use of effects and locations, explaining why the two companies are not (so far) working with a big Hollywood company on the project. The director is Tomasz Bagiński, who was nominated for an Oscar in 2002 for his short animated film The Cathedral.

There was a previous, low-budget Polish Witcher movie in the early 2000s, along with a short-lived spin-off TV show. Neither were successful and both were critically condemned. This new movie will apparently have a larger budget and be aimed at an international audience. If successful, it will be followed by more films and potentially a TV series adapting the remaining Witcher short stories and novels.

The Witcher is the story of Geralt of Rivia, a monster-slaying mutant who attempts to stand aside from the struggle between the human kingdoms of the north and the elder races (elves and dwarves) they are pursuing a genocidal war against. When a powerful empire to the south invades the northern kingdoms, Geralt is reluctantly drawn into the battle. The Witcher books are, in order of internal chronology: The Last Wish (1993), Season of Storms (2013), Sword of Destiny (1992), Blood of Elves (1994), Time of Contempt (1995), Baptism of Fire (1996), The Swallow's Tower (1997) and Lady of the Lake (1999).

Although successful in Poland, Spain, Russia and much of Eastern Europe, the Witcher franchise didn't reach a truly international audience until the release of three video games by CDProjekt: The Witcher (2007), The Witcher II: Assassin of Kings (2011) and The Witcher III: Wild Hunt (2015). The three games were hugely successful, selling many millions of copies in English and introducing the franchise to a much bigger international audience.
Posted by Adam Whitehead at 22:21