A History of Epic Fantasy - Part 31

In 2005 Tor Books released Elantris, the debut novel by 29-year-old Brandon Sanderson. Although it had a reasonable amount of coverage for a debut novel, it wasn't heralded as the "next big thing", just a solid opening volume from a new writer. That changed the next year when Sanderson released The Final Empire, the debut volume in the Mistborn trilogy. That really changed a year later when Sanderson was announced as the author who would be completing Robert Jordan's Wheel of Time sequence after Jordan's sad death from cardiac amyloidosis. Since 2005 Sanderson has published nineteen novels,  co-written (from Robert Jordan's notes) the final three Wheel of Time novels and also published ten novellas. He blogs and podcasts frequently, attends conventions and juggles multiple series and projects, as well as playing a lot of the Magic: The Gathering card game. His prolific output and relaxed and friendly interactions with fans have earned him a tremendous fan following. His solo novels have now sold over six million copies, with the Wheel of Time books adding another twelve million (at least) on top of that.

Sanderson core work is The Cosmere, which is the setting for almost all of his adult, original fantasy fiction. To date, this comprises the Mistborn books, Elantris, The Emperor's Soul, Warbreaker and The Stormlight Archive series, as well as the forthcoming White Sand graphic novels and Dragonsteel series (amongst others). According to Sanderson, the Cosmere is a compact dwarf galaxy which is home to a number of worlds inhabited by humans, who in this universe originated from a planet called Yolen. At some point in the past they migrated to other worlds (or were possibly recreated on other worlds) and were then cut off by the shattering of a being/entity/force called Adonalsium into sixteen "shards" of immense power. Those who came into possession of the shards each became a being of immense power, effectively gods, but they also became consumed by the nature of each shard, for good or ill. Each shard has a different form of magic or power related to it, in some cases wildly varying in capabilities.

Sanderson kept this "hidden background" was kept a mystery for his first few books. It wasn't until eagle-eyed fans spotted a mysterious character called "Hoid" appearing in apparently completely unrelated books that they began to piece together a much bigger picture. According to Sanderson, Hoid is one of a handful of individuals who can walk between the worlds using magic. He arrives on each world at a period of crisis, observes events, and then moves on. In some cases he is a background observer, almost impossible to spot. In others, such as the first two Stormlight books, he is  much bigger and more proactive character. Although this hidden background will rise to the fore and become more important in future books, it remains a relatively low-key (and, for some fans, still invisible) part of Sanderson's appeal. 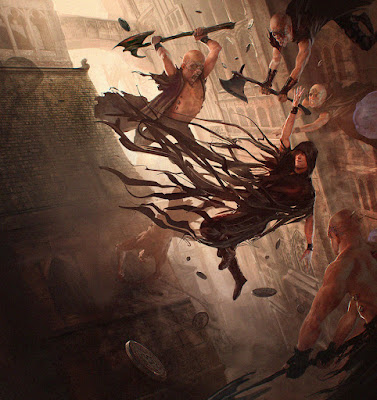 Sanderson's most well-known set of books is the Mistborn series. This opens with an initial trilogy: The Final Empire (2006), The Well of Ascension (2007) and The Hero of Ages (2008) before jumping forward several hundred years for a quartet consisting of The Alloy of Law (2011), Shadows of Self (2015), Bands of Mourning (2016) and The Lost Metal (forthcoming). Two additional trilogies are also planned.

The Mistborn novels take place on Scadrial, a planet that is choking under cloud cover produced by incessant volcanic eruptions. The people of the Empire are kept under the tight control of the immortal Lord Ruler, who is opposed by a band of rebels. Eventually these rebels gain a major victory, but in doing so inadvertently unleash a much greater threat. The initial trilogy deals with these events and introduces the setting's magic system which is based around the ingestion of different types of metal to produce sorcerous effects. This initial trilogy is standard medieval fantasy, but in a post-apocalyptic world. The follow-up novels, which were not originally planned but organically grew out of an idle project Sanderson began to kill some time, are set 300 years later when the setting has moved on and is now more reminiscent of the American Old West. The second trilogy is planned to take place in a more contemporary-like world, with skyscrapers, TVs and electricity, whilst the final trilogy will be more futuristic and will use magic and technology to achieve FTL space travel.

The Mistborn novels have fast-moving action, some well-drawn characters and some intriguing ideas, but the core draw is the worldbuilding. This challenges the notion many fantasies have of being stuck in stasis where nothing ever changes, or change very slowly, or where magic stymies scientific progress. Sanderson, like Jordan before him, suggests otherwise and that magic itself will become part of the scientific method in such a setting, losing its supernatural overtones as it becomes understood as a natural process of the world. 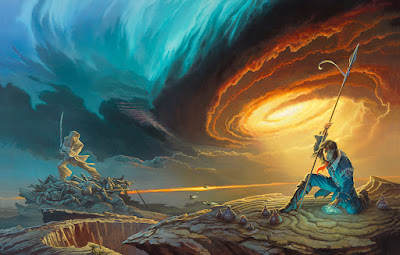 The Stormlight Archive is Sanderson's latest major magnum opus, planned to consist of two tightly-connected five-volume series. The books published to date are The Way of Kings (2010) and Words of Radiance (2014). The third book, Oathbringer, is expected in early 2017. This series, like Mistborn, is set on a world with a specific geographical feature, in this case massive highstorms that sweep across the planet from east to west. Both the human inhabitants and the wildlife have adapted to deal with these immense storms, but their nature and origin are unclear. There is a bit more of a thematic element as well, focusing on caste systems, slavery and ethnic divisions which are forcing the peoples of Roshar to work against one another rather than the gathering true threat.

This is a much bigger series than Mistborn, with each novel expected to weight in at a massive 400,000 words or so. There are multiple magic systems drawn from multiple sources, the geographic spread of the story is much vaster (an entire supercontinent, generated from a Julia fractal set) and there are many more characters and cultures involved. The novels both have a main storyline and "interludes", self-contained short stories and vignettes establishing settings, characters and ideas that will not be further explored until much later in the series.

The Stormlight Archive has been heralded as the heir to The Wheel of Time in terms of its size, scope and epic reach, and it looks set to replicate that success with its huge sales as well.

Sanderson has written books beyond these, including a superhero trilogy, the YA Alcatraz series and more, but it's The Cosmere mega-series (already being called The Dark Tower of epic fantasy), which will eventually encapsulate more than forty novels, that will be his most famous achievement. He writes fast-paced action stories with a maturing and increasingly satisfying prose style and some vivid characters, all set against a vast, cosmic backdrop which is stunning in scope.


Sanderson is one of the best-known authors to emerge from the 2000s, but there is another author who started writing in the 1980s and publishing in the 1990s, but it was only in the 2000s that they achieved a breakthrough in the United States, won a series of awards and gained a fervent and passionate fanbase...without anyone knowing who they were.
Posted by Adam Whitehead at 18:48

Where does The Lost Metal come from? I thought it was a trilogy - must have missed some article on Tor or Brandon's blog during Nano. ;-)

Brandon announced that the trilogy would be a follow up to ALLOY OF LAW, so it's ALLOY OF LAW+3 sequels. A bit like how there's going to be a "trilogy" of sequels to PROMETHEUS for four in total. It's apparently the new thing.

That sounds like Wax didn't listen when the author said he was just writing a little in between novel. :-) I know that sort of characters. *glares at Arminius who is to blame for a standalone turning into a duology or worse*

4 sequels to the Alloy of Law? Guess that means there no sequel to Warbreaker.

Sanderson is great, but I think the 40 connected books thing might really screw up the whole thing down the line. Its too much to demand from your readers.