THE EXPANSE renewed for Season 2, but no news of a UK broadcaster

SyFy has renewed its critically-acclaimed space opera drama series The Expanse for a second season. It has also increased its order to 13 episodes for the second season, from 10 in the first. 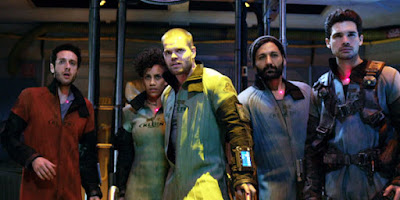 The Expanse's first season has done only moderately okay in the ratings for its first four episodes, but SyFy has cross-released the episodes through VOD services and its website. On this metric, the views-per-episode have increased from 1.5 million per episode to somewhere north of 4 million per episode. This, coupled with significant critical acclaim, has likely played a major role in the decision to renew.

However, there have been some issues with distribution. For example, the show is still without a UK screening partner almost halfway through its first season run. In addition, the late start and some poor timing for the release of the first few episodes (up against Christmas and The Force Awakens in cinema) have dented the noise and buzz the show might have otherwise generated.

Season 2 of The Expanse, which is expected to be based primarily around the novel Caliban's War, will debut on SyFy in early 2017.
Posted by Adam Whitehead at 19:29

Maybe they could so something crazy like show it on the SYFY channel in the UK ffs.

Jesus Mike, how about considering it properly before shooting your mouth off like that?

They can't do that... because... reasons. Clearly.