Space mercenary Grayson Hunt has been betrayed by his former commanding officer, Sarrano, who is now trying to kill him. Hunt tracks down Sarrano and forces his ship to crash on Stygia, formerly a pleasant colony world now overrun by mercs and the fercious wildlife. The battle between the two continues, with Grayson's obsession for revenge clouding all other priorities. 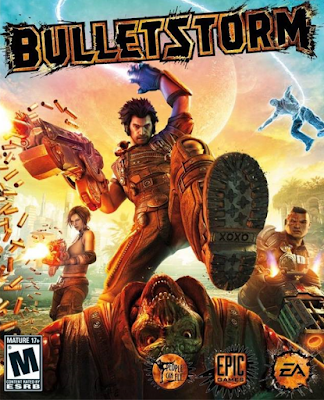 Bulletstorm is a first-person shooter with a fairly thin story (kill everything in sight) designed to support two  fairly unusual gameplay mechanics. The first is the "Killshot" system, which awards you more points for the more imaginative, visceral and spectacular ways of killing an enemy. The game unlocks more controls, mechanics and way for doing this, resulting in an ever-escalating sense of mayhem to the game. The second is the fabled "Kick" mechanic. Previously seen in the underappreciated Dark Messiah of Might and Magic, the "Kick" mechanic sees you introducing enemies to your character's foot, delivered into them at apparently hyperkinetic velocities capable of  sending a ten-foot-tall mutant clad in body armour flying about thirty feet in a given direction.

Bulletstorm is not a particularly subtle game, but it is quite a fun one. Dispatching vast hordes of enemies (occasionally this borders on Serious Sam levels of farcical numbers) with guns and The Kick is the order of the day, intercut by some spectacular vistas, some excellent graphics and a story that is basic but delivered very well. The game shows some amusing meta-awareness of its own status as a meathead bro-shooter, but doesn't go overboard with this. The game makes it clear that Grayson is an absolutely reprehensible idiot and seeing him called out on his stupidity by both his friends and enemies is quite satisfying. The other characters are well-drawn, particularly your constant companion Ishi who you have to half-lobotomise in the opening sequence of the game (to save his life) and he never really forgives you for it. In fact, the game's musings (restrained as they are) on violence and morality, combined with the rather Dubai-esque backdrops of the devastated cityscape most of the game occurs in, makes Bulletstorm feel like a very bizarre but appropriate companion game to Spec Ops: The Line. It's a comparison that weirdly works well. 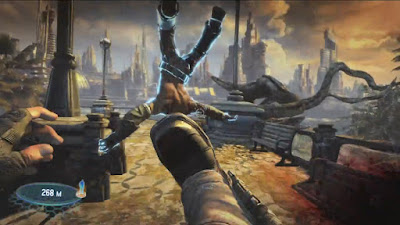 The action is satisfying, the graphics are impressive and the story, characters and writing are all better and cleverer than they really have any right to be. However, it is a short game, there are quite a lot of cut scenes and also far too many Quick Time Events, where player agency is removed in favour of the designers frothing at the mouth to show you how awesome this bit they've planned is (but rarely is). The game is also ridiculously easy, which apparently is deliberate: the designers wanted everyone to be able to finish the game, show off their killstreaks and get to the (groan) cliffhanger ending. That's great, but it does make playing the game a bit of a mindless affair at times.

Bullestorm (***½) is certainly not worth paying full price for, but if you can find it as a budget release it's a fast-paced, fun shooter with a bit more depth than is normally found in games of this kind. It is available now on PC, X-Box 360 (UK, USA) and PlayStation 3 (UK, USA).
Posted by Adam Whitehead at 12:14