Fantasy author Guy Gavriel Kay has been inducted into the Order of Canada, Canada's second-highest national award. He was inducted for his services to Canadian literature. 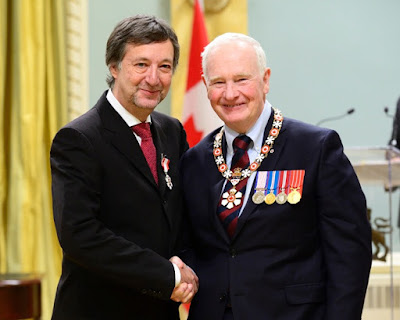 Guy Gavriel Kay is one of the world's foremost authors of fantasy fiction. His career began in 1974-75 when he assisted Christopher Tolkien in the editing of The Silmarillion, J.R.R. Tolkien's magnum opus which was left in a disordered state upon his death. Christopher brought the book to a publishable state by drawing on a large number of manuscrips, and Kay provided editorial assistance.

Congratulations to Guy on this honour!
Posted by Adam Whitehead at 21:09

That's awesome. I read Fionavar when I was around 12 and it was just out. It was my first post Tolkien fantasy, with the exception of Robert Aspirin and Lynn Abbey's Thieves World. Kay is a wonderfully skilled writer, and I wish he was more well known outside of genre fiction, even his lesser efforts are better than most. I can't wait for his next one. River of Stars was fantastic.

cool comment dude, ive never read him but now i want to