Hell's Kitchen, New York City. A shadowy property magnate is buying up crumbling tenements, dreaming of a "better tomorrow" for the city, but at the cost of people who have lived there for decades. Two hotshot lawyers decline a massive salary from a prestigious firm to set up their own independent practice and soon find themselves mired in corruption scandals and being asked to defend murderers. And, in the back alleys and drug dens, a masked vigilante is bringing his own brand of justice to the streets, one criminal at a time. 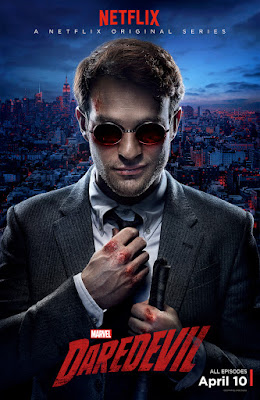 Daredevil is a fresh take on the Marvel Comics character, completely unrelated to the 2003 Ben Affleck film, although (obviously) sharing the same basic premise. Matt Murdock (played with quiet charisma by Charlie Cox) is a young man who was blinded as a child by a toxic chemical spill. Although he can't see as other people can, the chemicals have given him a sort of visual "sonar" which allows him to detect people around him. He becomes an attorney at law, but despairs of the crime and corruption he sees infesting his home neighbourhood of Hell's Kitchen. Having been trained in martial arts by a sensei as a child, he renews these skills and embarks on a one-man vigilante spree at night. However, his actions soon attract the interest of the media, the criminal gangs that control the area and he finds keeping his double life secret from his friends increasingly difficult.

So far, so standard. But where Daredevil succeeds is that it adopts a convincing cinematographic style that puts the camera and the viewer in the heart of the action. The fight scenes are spectacularly well-choreographed and acknowledge the fact that actually punching someone once usually isn't enough to render them unconscious. The series also accepts that the human body can only take so much punishment, and Murdock is frequently seen spending days recovering from a brutal fight before he can go back into action again. Having a superhero series which dwells on the fragility of its central character is unusual but this works unexpectedly well, emphasising Murdock's bravery - or stupidity - when he heads out to fight again.

The other thing Daredevil throws into the mix is the idea of the villain as an antagonist deserving of his own story arc and character development. It's four episodes before we finally meet crime lord Wilson "Kingpin" Fisk (Vincent D'Onofrio) but when we do, he rapidly becomes as important and compelling a character. We follow him as he develops his criminal enterprise, apparently with the beneficial aim of helping revitalise the city, and also falls in love with an art gallery owner, Vanessa Marianna (Ayelet Zurer). It takes a few episodes before Kingpin's fully monstrous side to come to the fore, as the show instead tries to show how he came to be who he is. Elaborate flashback episodes reveal Kingpin's childhood under an abusive father, whilst also filling in the backstory to Matt's accident, his upbringing by his father and later a martial arts expert, and how he and his partner Fogger Nelson (Elden Henson) met.

Other characters are also very well developed, with Deborah Ann Woll particularly excelling as Karen Page. Woll spent seven seasons on True Blood as reluctant vampire Jessica, where early interesting character development was undone by that show's descent into outright insanity by its midway point. Here Woll gets a lot more to do as Karen evolves from crime victim to legal secretary to self-motivated investigative agent. Toby Leonard Moore also gives a terrific performance as James Wesley, Fisk's right-hand man whose ice-cool professionalism masks an abiding loyalty to his employer.

The series takes advantage of its freedom as 13-episode show guaranteed to go the distance before being written. This is less of a procedural as a mini-series, one story unfolding over thirteen hours which takes full advantage of that running time to delve deep into the characters whilst also providing compelling action sequences, thematic musings on the nature of heroism and villainy and not being afraid to get experimental. In one episode it benches Murdock for most of the hour after a particularly bad beating to explore his childhood. In another, Foggy Nelson takes centre stage and he convincingly evolves away from mere comic sidekick to a fully-realised and capable lawyer in his own right. The show even has time to muse on the gentrification of New York and the good points and bad points about it, and on the changing nature of journalism. Almost preposterously, Daredevil's subplot about news reporter Ben Urich (Vondie Curtis-Hall) and his work at The New York Bulletin does a better job of discussing the evolving nature of news media than the final season of The Wire. The season also works as an extended origin story, bringing the elements of the Daredevil character and mythos together slowly rather than just by the end of the first hour.

Daredevil's biggest success is shifting the tone and atmosphere of the Marvel Cinematic Universe to something more serious, better-characterised, more grounded and far more interesting. It's helped by being shaped by a trio of writers who cut their teeth with Joss Whedon on Buffy the Vampire Slayer - Drew Goddard, Steven S. DeKnight and Doug Petrie - who have since gone on to work on other projects including Cloverfield, The Martian, Spartacus and American Horror Story. Their experience shows immensely in this well-crafted, ambitious, darkly-humoured and at times startlingly well-written drama series which makes you believe that a blind man can fight crime on the streets of New York City and prosper.

The first season of Daredevil (****½) is the best slice of the Marvel Cinematic Universe so far (note: I have not yet seen Jessica Jones) and may just the be the greatest superhero TV show to date, whilst also often working far beyond those narrow genre confines. It is available now on Netflix and will be released on DVD and Blu-Ray in 2016.
Posted by Adam Whitehead at 17:09

A great review of a truly excellent show. I agree with you that's it is the best super hero show of all time and I've seen Jessica Jones. Also excellent by the way but for me just a small step below DD -- though I would not argue the point with anyone who felt the opposite. They're that close. I'm looking forward to your review of JJ next!

I did feel the opposite. DD was excellent but JJ, for me, was even better. No matter, both are great and I hope the quality continues with Luke Cage, Iron Fist and The Defenders.

I have to agree with Craig that JJ is better. Personally, I think DD took too long to get going. Only when Wilson "Kingpin" Fisk (Vincent D'Onofrio) came on did it really became interesting. His love story with Vanessa Marianna (Ayelet Zurer) was actually very loving and touching. I know Punisher and Electkra are in season 2 but I hope we get to see Kingpin in some form in the coming season.

Apparently we're going to be seeing Frank Castle aka The Punisher next season. I'm really looking forward to seeing how they portray him, I have no idea if or how they interact in the comics so that will be a fun dynamic