The story behind Return of the Jedi, the troubled concluding movie in the original Star Wars trilogy, is as fascinating as the movie itself. Originally, George Lucas had planned an epic story in which Luke would defeat Darth Vader and score a major victory for the Rebels, but the Emperor would survive and the Empire would remain intact, not to be destroyed until the then-planned sequel trilogy. However, burned out on the franchise and afflicted by personal troubles, Lucas elected to change things mid-planning to wrap up the entire story in the third film. A second Death Star was introduced as the maguffin of the film and a planned battle involving armies of Wookiees led by Chewbacca was removed in favour of the more kid-friendly Ewoks. Producer Gary Kurtz left in disgust at the changes and Lucas brought in Richard Marquand, a somewhat obscure choice, to direct the film. Unlike on The Empire Strikes Back, Lucas was a constant presence on Return of the Jedi, directing some sequences personally. 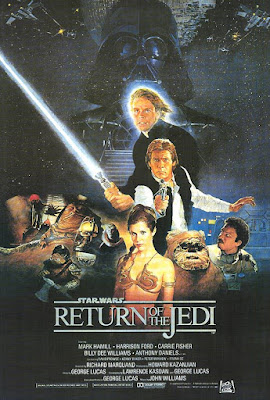 The result is a curiously uneven film but one that ultimately does its job of rounding off the story. Although hardcore fans moan about it, wrapping up the story in three films rather than six was probably the better idea. It does mean that the Emperor, who only had a cameo in the previous movie, has very little screen time in the original trilogy before his demise but the prequels do (if nothing else of value) help establish him a bit more as the ultimate villain of the saga.

Most Star Wars films consist of three distinct acts or sections, and Return of the Jedi does the same thing. The opening sequence where our heroes rescue Han Solo from evil gangster Jabba the Hutt is well-paced but potentially a little too easy given the huge amount of set-up for the kidnapping plot in Empire. Jabba as an unreasonable, murderous villain is also a little out of keeping with his more bumbling, comical role in The Phantom Menace and the New Hope special edition, but that's more of a problem with those films than this one. Still, there's some funny moments and a great action sequence in this opening section before we're off to the forest moon of Endor. This bit, involving Threepio being mistaken as a god, goes on for way too long but gives us another iconic action sequence with the speeder bikes. The film also does an odd thing in making the Ewoks cuddly and merchandiseable but also has them being savagely vicious in some of these sequences. The Ewoks - the most controversial part of the film for some, marking the start of Lucas's obssession with "doing something for the kids" - aren't actually that annoying by value of the fact that they are shown to have their own culture and beliefs, and when scores of them are gunned down by the Empire in the climactic battle are shown to grieve and get angry to avenge their fellows. They're certainly less annoying than the Gungans.

The climax of the film is a complex battle on three fronts which is complex but very well-handled. We have the epic showdown between Luke and Vader, the battle to bring down the Death Star's shields and the space battle as the Rebel Fleet and the Imperial Starfleet clash in what probably remains the finest space battle ever committed to the screen. The effects work, painstakingly created over a year using miniatures and motion-controlled cameras, is breathtaking and put together with tremendous skill. More important is the showdown between Luke and Vader, with the Emperor seeking to tempt Luke to the Dark Side. This element is not really credible (the Emperor having had a dozen years to corrupt Anakin by being his friend, it seems unlikely he'd expect to do the same to Luke in a few hours of being his captor) but that doesn't matter as Luke finally achieves his destiny, is tempted and rejects the temptation even if it means his own death. It's a strong emotional conclusion to the trilogy that ultimately satisfies.

On the flawed side of things, the Special Edition makes a whole bunch of changes to the film which are mostly pointless. In fact, some of them feel very weird indeed. The scenes showing the people on Coruscant cheering the defeat are strange, a bit like if peopled had been dancing on the street in Berlin to celebrate the Nazi defeat at Stalingrad. The Force Awakens, which confirms that the Empire did not collapse overnight after the Battle of Endor and the struggle continued for years, makes these scenes even odder.

Still, Return of the Jedi (****) may be the most flawed of the original trilogy but it's still a well-handled and entertaining movie that mostly satisfies as a conclusion to the saga. The film is available now as part of the complete (but soon not to be) Star Wars Saga box set (UK, USA).
Posted by Adam Whitehead at 11:34