Game of Thrones producer Frank Doelger has said that he expects the show to last for seven seasons, assuming audience figures remain strong. 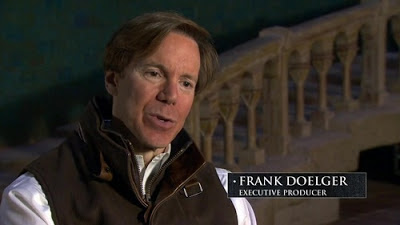 Doelger was interviewed backstage at the BAFTA Awards and said the following:


"[The number of series] is being discussed as we speak. The third season was the first half of book three, season four will be the second part of book three. George RR Martin has written books four and five; six and seven are pending.

"I would hope that, if we all survive, and if the audience stays with us we’ll probably get through to seven seasons."

The potential length of the series has been much-speculated about by fans, with the need to adapt the Song of Ice and Fire novels (relatively) faithfully clashing with the realities of TV production and how long a TV audience will wait for answers and resolutions. Previously showrunners David Benioff and D.B. Weiss had spoken of 90 episodes (nine seasons), whilst Doelger's comments seem to suggest that less is more likely. Indeed, with Book 3 spanning two seasons and seven books projected, it's telling that anything less than eight seasons (assuming the remaining books can all be fitted into one season each, which is not a given) is even being considered.

At the same time, even highly successful shows like Lost have ended after just six seasons, and shows like Star Trek: The Next Generation and Buffy the Vampire Slayer only managed to limp to seven years with a sub-par season (or two) thrown into the mix. True Blood arguably ran out of steam after three (four if we're generous) seasons and has been running on fumes ever since. So the chances of Game of Thrones - a massively expensive and time-consuming show to make which doesn't allow its producers much (or any) time off between seasons - making it to eight or nine years without burning out seem slim, so aiming lower and writing accordingly might be the better option.

To me, this suggests that the producers are envisaging a more radical move away from the books after Season 4 (if not this season), with perhaps more focus on bringing the existing characters and storylines to a resolution rather than bringing in lots of new characters and situations. Indeed, Benioff and Weiss previously said that Season 3 will be the peak of the cast in terms of size and future seasons would feature smaller casts. That suggests that we might not be getting the hordes of new characters the later books bring in, and casts doubt on whether we'll be going to locations like Sunspear where a dozen or more new characters would need to be introduced in one hit. This may improve pacing and clarity, but could backfire if some of the other storylines (particularly in Dorne) prove critical to the overall resolution of the story and the producers have to change their minds later on.

That the show would become much less faithful of an adaptation when it hit the problematic (from a structural point of view) fourth and fifth books has largely been expected by fans, but to get to the very end of the entire storyline in just forty more episodes after this season will require more compression and rewriting of the novels' storyline than what we have seen so far. If HBO and the producers can pull it off remains to be seen.
Posted by Adam Whitehead at 13:34

Very interesting. I think I'd rather see 7 seasons than 9. By the time they get to Feast/Dance the material will need a lot of changes. Having Dany still nowhere near Westeros after 5 or 6 seasons will not fly with tv audiences. Same with having the Others still not making their move. GRRM needs to write faster if he's going to keep up. He seems to have finally realized that lately so the foolish optimist in me is expecting to see Winds of Winter released after the fourth season next summer.

I don't think 9 seasons is any way implausible. It's rare for a genre show, yes, but a) most of the shows being discussed here produced far more episodes than even a 9-season run of GoT would, and b) they didn't have an existing template of books to draw from, which would mitigate the creative burnout to an extent. There's also the not-inconsequential fact that the show is now, officially, a HUGE success and is making tons of money for HBO, a network that doesn't seem to have another breakout hit going at the moment (though I'm not completely clear on that point). I'm sure that there are definitely some people who want the show to run 9 seasons, or more, even if they're all bean counters.

Also, whenever GRRM talks about the show's future it seems to be in terms of 9 seasons or more (he's suggested the next book will be another monster like ASoS and might take two seasons as well). But he of course has a vested interest in having more time.

I'd be very surprised if the show doesn't run at least 8 seasons, even if books 4 and 5 get mostly crunched into a single season (which is probably doable). It's possible that people might find the momentum slowing down in S5 and bail, but honestly, I doubt it--I think AFfC and ADwD will both play much better on TV, with the show's hyper-accelerated pacing and no more than the usual wait.

If confirmed, this could see the tables turned on book readers in a big way. Having read the books, I've been used to watching the show and browsing the net without risk of spoilers. Show viewers must have to pretty careful online at the moment if they don't want to be spoiled.

This'd be turned on its head if Game of Thrones is to finish in seven seasons. Unless he develops a stimulant habit to put Cujo period Stephen King to shame, GRRM is almost certainly not going to finish two books of the complexity required to wrap up the series within four years.

Frankly, I'd rather him not try. I've been reading and enjoying the books far too long for him to fudge the denouement because he's under pressure to crank out plot for the show.

Seven seasons would also mean Benioff and Weiss will need to hack away masses of material from the final four books (not a bad thing for some of the last two books released) and go a fair way off piste to resolve the plot, with guidance from GRRM on the major unpublished points.

Because the plotlines will have to converge so much sooner, book readers who don't want to be spoiled may have to stop watching the show and tread carefully online as early as Season 5.

This would doubtless be amusing for spoiler-careless show watchers and idiotic trolls alike.

Having lasted from 2001 to now having nothing spoiled, my head will likely implode when I discover, via a random comment on an unrelated Youtube video, that the whole thing was a dream of Catelyn Stark's, revealed when Ned steps out of the Winterfell hot pools...

I hope I'm wrong, but I think that George is going to do a Robert Jordan and die before he finishes.
HBO can write their own ending then.
George doesn't write when he travels, and he doesn't seem to stop traveling.

What if they increased the episode count per season to, say, 15? Then I think they could wrap stuff up in time.

I hate the idea people have floated about books 4 and 5 taking up three whole seasons together. That would be a waste of everyone's time, because (while I still like those books) the amount of plot development in the two of them is equal to or less than the amount in each of the previous books.

Given that Robert Jordan died of a ludicrously rare blood disease, the chances of the same thing happening to GRRM are statistically implausible.

Script editor Bryan Cogman has said (including here) that they can't physically make more than 15 episodes per season, at least (my speculation) not without reducing the number of locations and storylines that need to be addressed. Maybe if D&D are right and the complexity will ease off after this season it might become more practical. It would also require a major budget extension, and given that the show is making a handsome return for HBO with its existing budget, they might not be willing to do that.

I think HBO will use the time jump originally intended by Martin. Thus speeding up the story and avoiding the problems with the kids moving through puberty.

D&D are the only ones besides GRRM that know how it ends (or at least who sits on the Iron Throne and who survives)... so I'm sure they know what they're doing, and any storylines they drop or merge into others (like Gendry) are probably expendable in the grand scheme of things. I fully expect there to be plenty of material from Books 4/5 in the next season, this season seems to be taking up around 2/3 of Book 3.

Me too, it's looking like the TV show will have to give up it's novel roots after the third book. Instead of following the dismal Feast of Crows, it must tell it's own story. Not only because that volume is weak but because Martin will never publish two (or more) polished complex novels the the allotted time frame.

I'm hoping that GRRM has been forced by the show producers to write a plot outline of future novels so they can forecast their requirements for casting, locations, etc. Martin doesn't seem to mind collaboration [consider the Wild Cards series of books] and that way they won't run into insolvable problems down the road. [I'm reminded how the Hary Potter movie producers wanted to write Nigel out of the series...fortunately J.K. Rowling nipped that in the bid]. OTOH, it often seems to me that Martin is making up stories and characters as he goes along, and I can imagine a lot of stuff from books 4 and 5 will just get thrown out of the series. I agree that TV audiences may lose patience with the show if Danerys doesn't show up in Westeros before the series climax [which is the way it's starting to look].

"Script editor Bryan Cogman has said (including here) that they can't physically make more than 15 episodes per season, at least (my speculation) not without reducing the number of locations and storylines that need to be addressed."

Just to correct the above, Cogman said that they could make more than 10 episodes per season, not 15 :)