The Hugo Awards 2020: Or How Not to Run an Awards Ceremony

The 2020 Hugo Awards were presented last night at ConZealand, the first virtual WorldCon. Originally intended be held in New Zealand, the convention was moved online due to the ongoing coronavirus pandemic. George R.R. Martin remotely MCed the Hugo Awards from his home in Santa Fe, New Mexico. 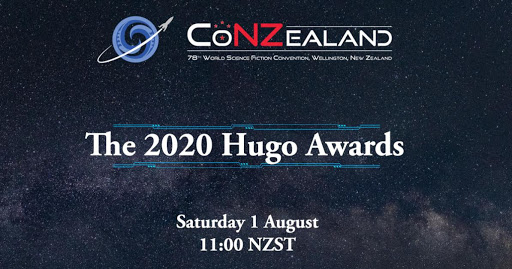 Both the WorldCon and the Hugo Awards represented an impressive technical achievement, with nominees and attendees taking part in events from across the globe, braving challenging time zone adjustments (the Hugo Awards started at midnight in the UK, even later in parts of Europe) to come together to represent the best of the genre.
Unfortunately, the tone and atmosphere of the wilds was, at times, at wild variance with the nominees and the winners. The Hugo Awards have evolved over the last decade to represent a more forward-thinking genre, overcoming controversies and attempts to subvert it. Seeing the award move away from constant rewarding of "the old standbys" towards genuinely rewarding more original and innovative SFF books by newer voices has been heartening. All of the nominees (well, apart maybe from me) this year had produced worthwhile and innovative work.
George R.R. Martin's hosting of the ceremony, however, focused almost exclusively on the ancient history of the award, citing winners and influential figures in the field dating back to the 1940s or even earlier. In his opening ceremony Martin noted that the virtual nature of the WorldCon this year would have brought more attention to it than previously from newcomers, and seemed determined to provide a potted history of the award and of the convention for their benefit. Not necessarily a bad idea and it would have been interesting to see this in the context of, perhaps, a historical documentary series or series of podcasts or some other format. Doing so during the award ceremony itself resulted at a schizophrenic feel to proceedings, as award recipients spoke about their work and their inspirations in 2020, only to cut to Martin and, later, Robert Silverberg discussing obscure WorldCon trivia from fifty or sixty years earlier about writers with no current relevance to the awards.
The situation was not helped by Martin mispronouncing several award recipients' names and even one of the nominated semiprozines. All nominees - including myself, with possibly literally the most straightforward name of all the nominees - were asked for a phonetic spelling of their name and those with unusual (from an American POV) names were also given the chance to provide a recording of the correct pronunciation, and all of this material was made available to ConZealand. It is unclear if ConZealand made this material available to Martin as well, although obviously they should have done so. Given that most of the names were voiced in pre-recorded inserts and the decision to switch to a virtual con was made many months ago, it is unclear why this was an issue.
The resulting, inevitable problem was the stupendous length of the ceremony. Over recent years the Hugo Awards have tended towards brevity and I was very happy that all three of the ceremonies I have attended (London 2014, Helsinki 2017 and Dublin 2019) were short and snappy, coming in at between two and two and a half hours. When older fans told me that back in the 1980s and 1990s, three and even four-hour ceremonies were not unknown, I was quite horrified. I know that GRRM was also a fan of the shorter, snappier Hugos, so it was surprising to see the length of the ceremony extend up towards the three hour thirty mark. My category was the fifth, which we didn't reach until 1 hour and 45 minutes into proceedings (I didn't win, with the multi-talented and insightful Bogi Takács instead taking the well-deserved Best Fan Writer prize). The timezone displacement was particularly punishing for us European fans, as the ceremony didn't start until midnight and carried on until well past 3am.
To say the handling of the award ceremony was flawed is an understatement: there was a tone deafness given recent changes in SFF fan culture and the makeup of the nominees (somewhat inexplicably, given that GRRM has championed some of those changes himself during previous Hugo controversies and has brought in new voices to the field through his anthology, Wild Cards and TV work), the ceremony went on around twice as long as was strictly necessary and there doesn't seem to be any excuse for making mistakes with people's names given the resources at hand.
I hope lessons are learned ahead of next year's ceremony.
UPDATE: George R.R. Martin has responded to some of the criticisms here. He notes that he was not passed on the phonetic recordings for nominees' names and that only a few written phonetic spellings were provided.
Of course, congratulations to all of the winners from last night's ceremony, all of them giving acceptance speeches of grace and dignity. A cut-down version of the award ceremony focusing on the acceptance speeches follows:
Best Novel: A Memory Called Empire by Arkady Martine

Best Novella: This Is How You Lose the Time War by Amal El-Mohtar and Max Gladstone

Best Novelette: Emergency Skin by N.K. Jemisin
Best Short Story: “As the Last I May Know” by S.L. Huang

Best Series: The Expanse by James S. A. Corey

Astounding Award for Best New Writer: R.F. Kuang
The 2021 Hugo Awards will be held, pandemic permitting, at the DisCon III WorldCon, which runs 25-29 August 2021 in Washington, DC.
Posted by Adam Whitehead at 20:24

Hey Adam, I've sorta known you a fairly long time now. I don't get a vote at the Hugos, but I want it put on the record that you have a literally fantastic blog, painstakingly detailed, and I'm a big fan. Long may you run....

GRRM has a statement on File770 about some of this.

Sorry you did not win and kudos for criticizing both GRRM and the organizers. I don't know about the wisdom of proliferating award categories, but clearly there have been blogs now for 20 years and YouTube for a dozen, and the excellence in both categories is not captured by fanzines or fan writing. Not sure how you view yourself, but to me you're a critic and a good one, and anything labelled as 'fan' whatever has unwelcome connotations of uncritical acceptance, groupieism, and an inability to criticize content across different franchises, genres, and time periods .Please continue to blog about whatwhat interests you because the wide range of content you survey is valuable.

The hugo awards have become diminished due to the awards being given to those who score best on the intersectional stack rather than on the quality of the work. A hugo nomination or win has become a recommendation not to buy something.

Also it's ironic to see the twitter cancel culture brigades come for GRRM but I guess he's an "old straight white man" so he's fair game these days, misandry, ageism and racism being ok with the woke crowd when they've got a target in their sights.

According to the UK papers, GRRM's remarks were racist, misogynistic and transphobic? I didn't watch - is that a fair impression, do you think?

I think that's going a bit overboard, especially given GRRM's history in bringing in female writers and writers of colour into the genre via numerous different venues (plus his current work with HBO on an adaptation of Nnedi Okorafor's books), his well-known progressive politics and his defence of the Hugos during the puppy issues of a few years ago (none of which seemed to warrant a mention in any of these press articles, of course). That doesn't mean he can't say or do things that are racist etc, but it's much more likely those are unintended rather than inherent. That doesn't make it okay, of course.

GRRM's remarks were certainly tone deaf, self-unaware and blinkeredly nostalgic for writers and times that I think most modern SFF fans don't give two hoots about. Mentioning Campbell and Lovecraft repeatedly in the way he did seemed to suggest that although he could agree that they were problematic figures, he thought their contributions to the field outweighed their character flaws. But when their character flaws were antisemitism and racism, including in Campbell's case some pretty egregious cases of gatekeeping to stop black SFF authors breaking into the field (like Samuel R. Delaney, who had to go to a rival magazine in the end), those are pretty big flaws to overlook.

I think there is potentially another issue to look at there as well, related to gatekeeping. I think Martin and Silverberg and others of that generation are very much still of the opinion there is an SFF "canon" that everyone who's into the genre should read, and that includes work by Campbell, Lovecraft, Heinlein, Asimov etc, whilst more modern readers seem to be of the thinking that a lot of these writers are old-fashioned, tired and simply not very good in terms of prose, their treatment of female characters or dialogue, and really aren't that relevant any more.