Daniel Abraham's The Price of Spring, the splendid concluding volume of The Long Price Quartet, one of the very best fantasy series of the last decade, will not have a mass-market paperback edition in the USA. This news has dismayed fans of Abraham's works, particularly those who have been holding out for the mmpb edition. 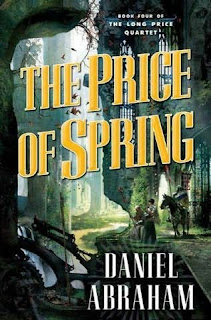 No reason for this decision has been given, but is probably linked to the somewhat underwhelming sales of the series in the US (although given widespread reports of people not being able to find the books in their local stores, this is not surprising) and Tor USA's decision not to publish Abraham's next series, The Dagger and the Coin.

For now, the hardcover remains available and the book is published in paperback in the UK, although only as an omnibus with An Autumn War. The Book Depository has free worldwide shipping and is currently selling the book at 30% off, so Americans after the paperback edition are directed to their website.

The Dragon's Path, the first volume of The Dagger and the Coin, will be published in both the UK and USA by Orbit Books in June 2011.
Posted by Adam Whitehead at 10:12

Email ThisBlogThis!Share to TwitterShare to FacebookShare to Pinterest
Labels: daniel abraham, news, the dagger and the coin, the long price quartet, the long price: seasons of war, the price of spring

Thanks for the info. I've been waiting on the paperback for a while now (in Canada). I just ordered the hardback from The Book Depository. Can't wait to get my hands on it!

Publishers are just shooting themselves in the foot with these shenanigans. It was bad enough to go from Hardcover to Trade to MM rather than Hard to MM as before. And now the new price point for MM books is $9.99?...what a joke.

This is a fantastic series that clearly deserves better treatment.

I've been reading this series digitally, and it was kind of a shock to discover that the Price of Spring isn't available in the Kindle store! I ended up purchasing it as an iBook.

Hopefully we'll see a US omnibus edition soon so I can buy copies for my friends who I know would love them.

Sounds like we were lucky to get the omnibus editions in the UK. (I read them in two chunks and thought they were amazing. Splendid is the word.)

okay. here is my reasoning[as far-fetched as it sounds].but I guess since tor was already prepping up brandon "needs more magic" sandersons new series, i guess they didnt want any thing else from them overshadowing what they had planned for the crapfest-in-the-making that is the way of kings.

that being said, i never read or got interested in daniel abraham[im more into grim and gritty fantasy, hince my dislike of sanderson]but i,ll try and see if abraham rocks my world[his dagger and the coin series sounds promising

Publishers sadly at it again - did you see Liz Williams' post on Night Shade Books?