Kate Elliott on returning to her JARAN SF universe

Kate Elliott is working on the second volume of her new Spiritwalker Trilogy, but recently blogged that an extremely long-standing plot problem which brought about an end to her Jaran science fiction series has been resolved, and she now 'knows how to' write the fifth volume in the series. No firm plans have been made to write this book, as Elliott has the remainder of the Spiritwalker series followed by additional books in her Crossroads fantasy universe planned. It would also be preferable if the existing books were reprinted before a new volume was written, which obviously depends on Elliott's publishers. 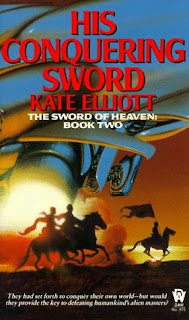 The published Jaran books are Jaran (1992), An Earthly Crown (1993), His Conquering Sword (1993) and The Law of Becoming (1994), with the second and third novels actually one very long novel called The Sword of Heaven that was split in half for length reasons. The fifth book, if it is ever written, would be called The Game of Princes.

In related news, Elliott has also disclosed that Cold Fire (the second book in the Spiritwalker trilogy; the first, Cold Magic, is out in September) features both zombies and sharks, but sadly no news on ninjas and/or pirates yet.
Posted by Adam Whitehead at 11:19

The sharks have eaten the ninjas, and the zombies dined on pirate brains, that's why. :)