Doctor Who Adventures: City of the Daleks

Given that Doctor Who predates the creation of computer games by some years and has existed alongside them since way before Pong appeared, it's surprising to learn that there's been very few serious attempts to make a proper Doctor Who title. There was an 8-bit platformer called The Mines of Terror during the Colin Baker era, and a 1992 action title called Dalek Attack which was fun, if not really in keeping with the spirit of the TV series, depicting as it did Patrick Troughton and Sylvester McCoy's Doctors jumping around blowing away Daleks with plasma cannons. 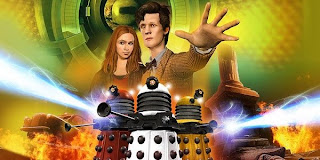 The BBC have teamed up with the creators of the Broken Sword adventure game series to try to deliver something a bit more interesting. Their approach is to follow the episodic structure favoured by Telltale Games with their recent Monkey Island and Sam 'n' Max titles. The Doctor Who Adventures series will thus feature four episodes set in different locations and see the Doctor and his companion Amy battle various foes, new and old alike. City of the Daleks is the first game in this series.

The game is modelled closely after an episode of the TV series. We get a teaser which dramatically climaxes, followed by the opening title sequence (a 3D rendition of the TV title sequence), followed by roughly 90-100 minutes of adventuring and the closing title sequence. Matt Smith and Karen Gillan lend their vocal talents to the game, the TV show's composer is behind the music, and the TV producers act as advisors, whilst one of the TV scriptwriters is behind the dialogue. Steven Moffatt has also promised to treat the four games as canon, although how far that will go remains to be seen.

The game opens with the TARDIS arriving in London, 1963, the Doctor having promised to introduce Amy to the Beatles. This proves to be impossible, as Earth is in ruins and under Dalek occupation. The Doctor, realising that the Daleks have changed time on a massive scale, travels to the Dalek homeworld of Skaro to discover how they have managed this. The game is split into two sections, the first in London with the Doctor and Amy avoiding Dalek patrols and making contact with the last human survivor, and a second on Skaro as the Doctor attempts to put right the Daleks' meddling with the timestream.

The gameplay is interesting, as the Doctor can't simply whip out a laser cannon and start blowing Daleks away. His non-violent ethos basically means using lots of stealth sequences to sneak past Daleks (whose fields of vision are helpfully outlined in green) and then using the sonic screwdriver or other pieces of equipment he has picked up to solve simple puzzles and progress. These puzzles are represented as slightly tedious mini-games in which you have to connect up circuit boards or guide objects through electric mazes. The first one of these is dull, but by the time you get to the fourth or fifth you may end up losing the will to live. Graphically the game is also not exactly much to write home about, but this has the benefit that it is able to work on a wide variety of hardware. Movement controls could be more responsive (both the Doctor and Amy have a surprising amount of inertia, and take a few seconds to get moving after you press the relevant control, which is odd) but generally the interface works quite well.

Luckily, the story is decent, with some nice dialogue and some great continuity references that will keep old-school Doctor Who fans happy (particularly the reappearance of the Varga plants from the 1960s). We also get our first good look at Skaro since the 1979 adventure Destiny of the Daleks, apparently based on what the TV producers have planned the Dalek homeworld to look like if they ever visit it in the TV series itself. The gameplay has to be feasible for younger players, so the puzzles are not particularly difficult and progress is very straightforward, helped by a surprisingly excellent autosave system.

As a first try-out, this is reasonably effective. However, I hope they change the mechanics a bit for future games. If the next title sees the Doctor and Amy having to dodge Cybermen with vision cones whilst playing more maze mini-games, this could get really old really quickly.

City of the Daleks (***½) is a solid little game which doesn't outstay its welcome, is reasonably fun and, best of all for those of us in the UK, is free of charge (well, it isn't actually, but we've already paid for it as part of the licence fee). Those of a foreign persuasion have to wait until July until it becomes available for a nominal charge, the details of which remain unclear at the moment. The game is available on PC now and on Mac from 15 June.
Posted by Adam Whitehead at 15:56

"Given that Doctor Who predates the creation of computer games by some years..."

That's not really true, I would say. Spacewar! predates the good Doctor by about a year, and there were also some earlier games. The first game sold for money would take about another decade though, that's true.

I knew about SPACEWAR! but had forgotten its date, I thought it had been later in the decade. IIRC, someone in the 1950s was also able to rig up a computer to play noughts-and-crosses, which would technically count.

But yup, I was mostly thinking of commercially-available games that you buy in the shops, which came about a decade later.