The Lunar Industries corporation has given the world cheap energy thanks to a helium-3 mining operation on the far side of the Moon. Helium-3 is mined by massive automated harvesters and freighted back to Earth. The operation is controlled by a single moonbase, Sarang. To keep costs down, the base is manned by only one man at a time, helped by the base's artificial intelligence, GERTY. 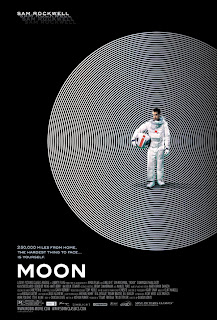 Sam Bell is nearing the end of his three-year stint on the Moon and is looking forward to returning home to his wife and daughter when he starts experiencing odd hallucinations and mood swings. Whilst driving out to repair a harvester, he is involved in an accident. Recovering back at the base, Bell is confused by the way GERTY is treating him, and the lengths the AI is taking to ensure he doesn't leave the base...

Moon is the directorial debut by Duncan Jones, an old-school SF film very much in the vein of late 1970s/early 1980s movies such as Silent Running, Alien and Outland, including a very small cast, a strong visual look and some superb model work, with very little CGI present in the film at all. An absolutely brilliant Sam Rockwell is the only actor with significant screen time, although the Kevin Spacey-voided GERTY has a reasonable amount to do as well.

Moon has a strong theme of isolation. Bell is alone on the dark side of the Moon, without even Earth on the horizon to look up to. The communications satellite is broken, meaning that communications with Earth are long, pain-staking and tedious. The fact that Bell is starting to hallucinate and see things is understandable given his sense of loneliness, but, as with all good SF movies, we are asked if there is something more to his visions than just good old insanity. Moon rewards at least two viewings, as the director expertly sets up some clues as to what is going on before the big revelation (which interestingly isn't a last-minute twist, but happens fairly early on with the rest of the story dedicated to exploring it in greater depth).

The movie poses some interesting questions on duality, our sense of self, and what defines a person. In this regard it is the best SF novel that Christopher Priest never wrote. The atmosphere is taut and claustrophobic, with occasional moments of black humour that work well. Jones uses the viewers' likely experience of previous SF films against them: is GERTY a positive and helpful AI, or is he cracking up like HAL? Jones also knows when to play a trope straight, when to invert it and when to send it up quite nicely.

The only negative that comes immediately to mind is that the end of the film is a little bit too neat (although still very satisfying) and there are one or two elements left under-developed (such as Bell's family back home). But otherwise, this is a fine, intelligent, atmospheric and at times unsettling SF movie.

tbh i was a little disappointed in this movie. yes, for a small budget, the movie looked great. yes, rockwell did a fantastic job. but everyone was telling me how mindblowing it was before i saw it, and so when i easily guessed the "big twist" within the first 5 minutes of the movie...well, like i said...disappointment. i think a major reason why i was disappointed is because i went into the movie with such high expectations. that's why i haven't read any reviews or any background on nolan's new movie inception. i think going into a movie without any prior context is the way to go...the subsequent immersion seems more complete, amirite?

Absolutely loved this film. Yes the "twist" was obvious if you knew to look for it but that didn't matter, it was the way it was filmed, the superb acting by Rockwell and the absolutely stellar score by Clint Mansell.

One of the best sci-fi films I've seen int a long, long time.

It's also available to "Watch Instantly" on NetFlix, if anyone has an account with them...

Good review, but I was hoping you'd load it with spoilers, so that people could complain! That's always a lot of fun...

I also meant to say that the first time I watched it I was rather pissed off by the very neat ending, mostly to do with the voice overs heard at the end. I would have preferred to be left wondering what happened when..... rather than know for sure. Still feel that way but not as much as I did previously.