Overlook Press have, via their 2010-11 catalogue, issued their cover art for Scott Bakker's The White Luck Warrior, the second book in his Aspect-Emperor trilogy and the fifth book in his Second Apocalypse saga. 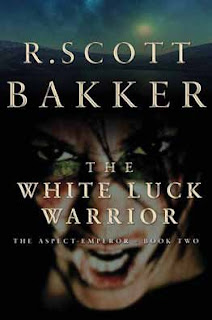 The book is due to be published in March 2011 by Overlook in the USA and Orbit in the UK.

Widely praised by reviewers and a growing body of fans, R. Scott Bakker has already established his reputation as one of the few unique new talents in the fantasy genre. Now he returns with the long-awaited The White Luck Warrior—the second book in the Aspect-Emperor series.

As Anasûrimbor Kellhus and his Great Ordeal march ever farther into the wastes of the Ancient North, Esmenet finds herself at war with not only the Gods, but her own family as well. Achamian, meanwhile, leads his own ragtag expedition to the legendary ruins of Sauglish, and to a truth he can scarcely survive, let alone comprehend. Into this tumult walks the White-Luck Warrior, assassin and messiah both.

The White Luck Warrior is a story filled with heartstopping action, devious treachery, grand passion, and meticulous detail. It is both a classic quest tale and a high fantasy war story.

Thanks to Jussi at Westeros.org for the news.
Posted by Adam Whitehead at 18:30

I dig it -- conveys a certain intensity, and the dull sun reminds me of the Great Ordeal, trekking to the Horns.

I don't care for the cover either. Had it been painted and not photo looking I may have had a more positive prospective, but as it is I want nothing to do with it.

I don't care for the cover either. But then the first book of the series left me cold. So I'm not sure I'd buy it anyway.

I don't care that people don't care for the cover (not great IMO), this is my single most anticipated book right now.