Behold, the final cover design for the first Monarchies of God cover omnibus, complete with the updated helmet image and Steven Erikson cover quote. Click on the image to see it in all its glory: 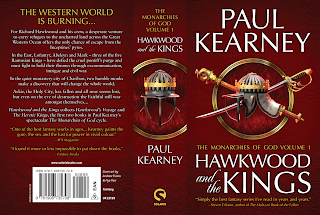 There is also an art blog here about the process of selecting and painting the cover and redrawing the book's maps.

Hawkwood and the Kings will be released in August 2010 in both the UK and USA from Solaris Books. The Century of the Soldier will follow in September, completing the omnibus reissues, before Paul Kearney's new novel Corvus is published in October.

EDIT: To confirm, Century of the Soldier contains a new, revised edition of the final book in the Monarchies of God sequence, Ships From the West, featuring 5,000 words of new material.
Posted by Adam Whitehead at 14:36

Has it been confirmed that the 2nd Omnibus will contain the updated version of book 5, Ships from the West?

I was talking to a store worker in my local Games Workshop her in Belfast and he told me Paul Kearney is writing a novel set in the Warhammer Fantasy universe.

He wrote a short story that was included in the recent Death Before Dishonour anthology and it was by far and away the best tale in the volume.

Aren't Black Library and Solaris arms of the same publisher?

Looking forward to these reissues and Corvus.

Solaris used to be owned by Games Workshop and were a sister-imprint to Black Library. However, GW sold off Solaris to Rebellion (the owners of the 2000AD comic) last year, so that relationship no longer exists.

As well as DEATH BEFORE DISHONOUR, Paul has also recently written BROKEN BLOOD, a WH Fantasy/Empire short story for a forthcoming anthology, so that may be where the confusion is coming from. I'll ask him if he has plans to write a full WARHAMMER novel though.

"We've had talks about it, and I've spoken to Nick Kyme about it at length, but I'm not really sure it's a fit for me - they wanted an Empire story, about Pistoliers,whereas I'd be far more at home with Space marines - and there it hangs..."

I....never tried him before. is he any good?