Sara Douglass on cancer and mortality

Popular Australian fantasy author Sara Douglass has published a post about how people face death, spurred by the re-emergence of her cancer several months ago, which is now inevitably terminal. 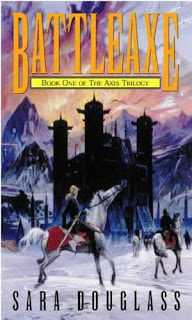 Sara is the author of several popular fantasy series, including the enjoyable Axis Trilogy, its sequel series The Wayfarer Redemption (all six books are known under the latter title in the USA), the unrelated Troy Game quartet and the current Darkglass Mountain sequence, as well as the historical series The Crucible.

It's a personal and powerful statement, all the more notable coming as it does after recent statements from Terry Pratchett (who is suffering from early-onset Alzheimer's) and, prior to his passing in late 2007, Robert Jordan on similar issues. Our genre has suffered far too many premature losses recently, and the news that another of our authors is facing a terminal illness is tremendously sad. I send my best wishes, as inadequate as they are to Ms. Douglass and her family.
Posted by Adam Whitehead at 20:37

I'm so sad to hear this. I didn't know about Terry Pratchett either. Thank you for the post.