The Dervish House by Ian McDonald

Istanbul, the Queen of Cities, the bridge between east and west, in 2027 freshly-accepted into the European Union and now awash with new money and new technology. Nanotech is the future, tiny machines which can power amazing toys, keep you healthy, dig out that cancer and, whether you want them to or not, rewire your brain. 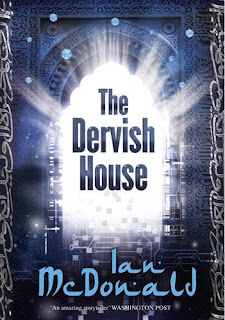 A suicide bomber destroys an Istanbul tram, but only the bomber dies. The explosion forms a crucible around which the lives of the inhabitants of an old dervish house intertwine: a boy detective with a weak heart and a robot monkey sidekick, a Greek economist burying his head in the wreckage of the past, and an art gallery owner and her trader boyfriend with the ultimate get-rich-quick scheme. For this is an important week for Turkey, as corporations fall, new technology emerges, religious visions occur and vital football games are played.

The Dervish House is one of the more eagerly-awaited SF novels of 2010, the thematic follow-up to McDonald's River of Gods (India in the 21st Century) and Brasyl (Brazil in the 21st Century). This time he tackles Turkey, a country torn between east and west, Islam and secularism, Europe and the Middle-East, and argues that this vibrant nation could become an economic and technological powerhouse in the non-too-distant future. He also makes some pretty bold predictions, setting the book a mere 17 years in the future in a world which is radically more advanced than ours in several areas. Will nanotech explode into being and transform people's lives as completely and as rapidly as he suggests in the novel? It will be interesting to see if this happens. 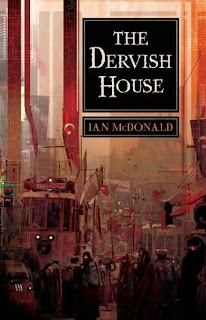 Beyond the technological aspects, this is a book about the people of the dervish house. Structurally we move between several POV characters who live in the different apartments of the house and follow their stories as they gradually become more intertwined with one another, building to a satisfying climax. The individual stories, centred on multi-layered characters, are compelling. They range from the attempts by Necdet to deal with sudden eruption of djinn visions to Can the Boy Detective and his nanotech-driven robot sidekick's adventures across the Istanbul rooftops to Georgios Ferentinou's melancholy attempts to put right a wrong almost fifty years in the past, and their eventual combination in various and unexpected ways is well-handled.

The book has its moments of cruelty (the dark side of life in Turkey is definitely not glossed over), but there is also a wry humour here, if less overtly joyful than Brasyl's. It is difficult not to compare The Dervish House to its predecessor and find some elements lacking: Brasyl is simultaneously tighter thematically with fewer POV characters, but also lighter, funnier and more immediately intriguing. The Dervish House definitely doesn't really get going until its second half. That said, The Dervish House is also somewhat less out-and-out insane with a more restrained, more believable and much more elegant conclusion. McDonald's prose remains as pleasing to read as ever, with rhythm and cadence changing from character to character satisfyingly.

The Dervish House (****½) is a fascinating, thought-provoking, challenging and engrossing novel. It is available on 27 July in the USA and 29 July in the UK (although some American readers have reported already seeing copies on shelves).
Posted by Adam Whitehead at 21:50

"He also makes some pretty bold predictions, setting the book a mere 17 years in the future in a world which is radically more advanced than ours in several areas. Will nanotech explode into being and transform people's lives as completely and as rapidly as he suggests in the novel? It will be interesting to see if this happens."