The crew of the Ketty Jay are down on their luck. A year after the events at Retribution Falls, Darian Frey is reduced to robbing an orphanage to keep his craft in the air. And when he can't even pull that off, it's clear that the crew need a lucky break. Enter Captain Grist of the Storm Dog and an offer that is too good to refuse: a mission to a hostile island to retrieve valuable artifacts from a civilisation dating back to before the dawn of time. The money is good, the opportunity for fame and glory huge. What can go wrong? 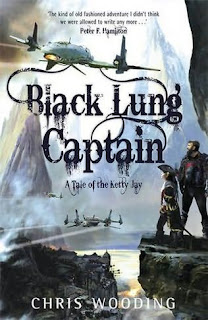 Obviously, the answer is a lot. The Black Lung Captain is the second volume in the Tales of the Ketty Jay series, following on from last year's excellent, Arthur C. Clarke Award-nominated Retribution Falls. Readers of that book will feel immediately at home here, as Wooding continues his Firefly-meets-steampunk story of a clapped out aircraft and its crew struggling to make ends meet in a hostile world of shady deals and, at the fringes of civilisation, hostile savages.

The Tales of the Ketty Jay series promises to be somewhat episodic, with this book seeing the crew of the Ketty Jay embarking on another adventure. However, character arcs and storylines are continued from the first book. Pleasingly, these aren't separated from the plot and in some cases are vital for the resolution of the story. Those who were left wondering about Jez's unusual heritage and abilities from the first book and the dark secrets of the tormented daemonologist Crake will find these stories continuing to unfold in this novel. In fact, there's enough references to the previous novel and the backstories of the main characters that it would be difficult to recommend readers to start with this novel. There is a particularly satisfying evolution of the character of Trinica Dracken and the recurring supporting characters of the Century Knights (who are interesting and strong enough characters to possibly warrant their own spin-off novel or series at some point in the future).

On the minus side, The Black Lung Captain does not feel as immediately fresh and vibrant as the first novel. The callbacks to the first novel are part of this, but more notable is the fact that, just as with Retribution Falls and indeed Firefly and many of the pulp books and adventures which inspired this series, there's a slight sense of predictability to events. The number of times our heroes are double-crossed, held at gunpoint, swap sides and so on is quite high, to the point where, by simply assuming that the worst possible thing will happen at every story turn, you can almost predict what will happen next, at least until the major twists in the plot start happening towards the end of the novel.

These are minor issues, however. The Black Lung Captain, like its forebear, is page-turning entertainment from start to finish, packed with aerial battles, chases, intrigue and hints of much bigger stories to come.

The Black Lung Captain (****½) will be published in the UK on 29 July. A US edition is in the works for next year, but the UK edition will be available on import much sooner.
Posted by Adam Whitehead at 18:35

How many books are planned in this series?

Initially three. The third book, THE IRON JACKAL, is due next year, and there may be more.

Wooding confirmed there will be at least 4 books. The contract for THE IRON JACKAL was a two book deal, which includes an as yet untitled 4th Ketty Jay book.

I just saw that, which is excellent news.

Interesting to see if the books will be more episodic, say like an airborne version of SHARPE, or if there will a continuing big storyline in the background. The blurb for THE IRON JACKAL sounds like it will tie up a lot of elements established in the first two books.

Hopefully the writing and plotting will pick up a bit from book one, which frankly, seemed aimed at young teens rather than grown-ups with its unoriginality (ripping-off "Firefly" does not make one creative or original ) lack of any complexity , rather too obvious plotting and at best 1,5-dimensional characters.... There were vast spaces to improve into.

Then again, since it was nominated for an "Arthur C. Clarke" (I do wonder how they arranged that...) that might never actually happen.

writinwater: ignoring FIREFLY for a bit, I understand your trouble with the book, but if you look at it differently, its really [at least for the first novel], not trying to be anymore than what it is: an awesome, action-packed thrill ride but with a smart head on its shoulders. and while the writing is simplistic, I wouldnt out it as a YA novel [pat on his blog does this often].

oh and speaking of firefly, TRY not to think of it when reading the booit is its own creation, after all]. but still, whats funny about that is that I made the mistake of watching firefly before reading retribution falls and kept imagining the main charactor as malcolm [yikes].

Thanks for the review. First one I have seen. I greatly enjoyed the first book and have BLACK LUNG CAPTAIN pre-ordered. Sounds like I'm not going to regret that in the least.

hmm, the reader has to ignore "Firefly" (and the pretty obvious pagiarism) , as well as the stolen snippets from "Sharpe" and a myriad other "motley band of rogues" novels to make this book worth reading ? So basically has to dumb down to enjoy it ?

Now, that is an endorsement truly worth remembering....

As for "young adult", I stand by that sobriquet. The series so far has never been anything but clichee, pretty basic,rather hormonally charged ( the ludicicruous scene in the nunnery springs to mind ) and with absolutely no deeper motivation or second thoughts about the characters' backgrounds implications - such as Jez "condition" or the strange bond between mechanic and captain
There is not even the threat of real loss which is one of the drivesprings of the adventurous pulp-genre. Little if any memorable wit or hair-raising stunts

If the action was in any way realistic or at least gritty, that might not be a problem, but it is as bloodless, free of real threat to the protagonists and not even written "rousingly".... sorry, that's watered-down and diluted YA stuff.

So come again, what precisely were the strong points of this book ?