The Jamur Empire is riven by internal turmoil and the threat of external invasion. Chancellor Urtica has usurped the throne and seized control of the capital, Villjamur, but the rightful empress, Rika, has fled the city with her sister Eir and their protector, the redoubtable swordsman and con-artist Randur. They decide to head for the far northern city of Villiren, where their potential ally Commander Brynd Lathraea of the Night Guard and his loyal troops have been dispatched, but the journey is fraught with danger and unexpected encounters with both allies and enemies. 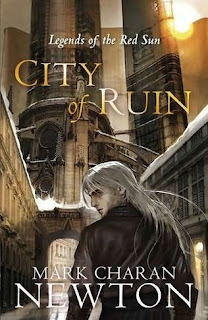 Meanwhile, the mysterious Okun are massing on the island of Tineag'l, the population of which they have already slaughtered down to the last man, woman and child. The Jamuran armies are converging on the city of Villiren just across the straits from Tineag'l, ready to make a stand there against a remorseless enemy whose true capabilities and goals remain unknown. As Brynd organises the defence of the city, his own secrets are exposed by a local gang lord and he finds himself open to blackmail. In the city itself Inspector Jeryd does his part for the war effort by investigating the disappearance of dozens of civilians and soldiers in the past few months, a mystery that will lead to unforeseen ends.

City of Ruin is Mark Newton's third novel and the second book in the Legends of the Red Sun series, following on from last year's extremely well-received Nights of Villjamur. City of Ruin directly follows on from the previous novel. Although its central storyline - the defence of Villiren - is self-contained in this book, the character arcs continue from the first novel and some foreknowledge of those events is assumed.

In Nights, Newton deliberately held fire on some of his more fantastical elements for commercial purposes. The ambition of the Legends of the Red Sun series appears to be to fuse the originality and diverse influences of the New Weird with a more traditional epic fantasy narrative. This was evident in Nights of Villamur, but comes much more stridently to the fore in City of Ruin, with several nods to the work of China Mieville (one fairly obvious, the other possibly coincidental given how quickly this book came out after Kraken). The book's place in the 'Dying Earth' subgenre is also made more clear, with references to the shrunken red sun and a minor character who shares a name with one of Jack Vance's most famous characters (which, for those familiar with Vance, may briefly drag you out of the book, but is a very minor issue). Newton successfully achieves a feeling here of a vast history stretching back a quarter-million years with successive waves of civilisations rising and falling until the present day, whilst simultaneously expanding the scope of the world and story to a more cosmic level. This can be risky - Alan Campbell's initially excellent Deepgate Codex trilogy eventually collapsed under the weight of its vastly expanded scope - but Newton handles it well here.

Newton also flexes his full-on, all-out war scene muscles here as a desperate battle for the city of Villiren is mounted in the book's conclusion. Newton's background as an editor for Solaris and their former sister-company, the Black Library, comes to the fore here as a furious urban battle rages which I can imagine Dan Abnett nodding approvingly over. Newton brings together both established and new forms of magic and various creatures to create some very impressive and original combat sequences, and is not afraid to ruthlessly slaughter major characters (from both this and the first book) in offhand ways.

City of Ruin (****½) is an excellent fantasy novel fusing elements of the New Weird and traditional epic fantasy into a satisfying whole. The novel is available now in the UK and will be published next year in the United States.
Posted by Adam Whitehead at 19:16

Email ThisBlogThis!Share to TwitterShare to FacebookShare to Pinterest
Labels: city of ruin, legends of the red sun, mark charan newton, nights of villjamur