Bantam UK have been a bit quiet about it, but they are issuing the first three Malazan novellas - Blood Follows, The Healthy Dead and The Lees of Laughter's End - in omnibus in August. Excellent news. 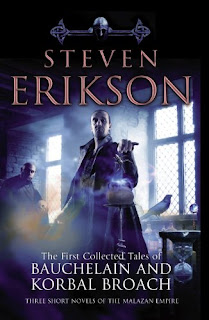 Orbit will be publishing a new space opera series called The Expanse in May 2011. The first book is called Leviathan Wakes. The author's name is James S.A. Corey, although Amazon rather pointlessly defeated the point of having a pseudonym by revealing this is really Long Price author Daniel Abraham and debut novelist Ty Franck (whose side-job is as George R.R. Martin's assistant) collaborating together. Should be interesting. Abraham's solo novel The Dragon's Path, the first volume in The Dagger and the Coin (apparently a melding of Joss Whedon, Martin and the Medicis), follows a month later.

On the GRRM front, Fantasy Flight have decided to reprint the excellent Art of Ice and Fire this autumn. This is a new edition, updated with fresh artwork from their Battles of Westeros board game, and will apparently be the first in a series. 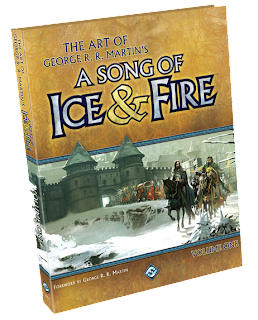 Email ThisBlogThis!Share to TwitterShare to FacebookShare to Pinterest
Labels: a song of ice and fire, daniel abraham, george r.r. martin, news, steven erikson, the malazan book of the fallen

I see the Little, Brown site says of The Expanse that "Jimmy Corey writes with the energy of a brash newcomer and the polish of a seasoned pro". That would be because he's, well, both.

Wert, why spread the reveal? I mean, I'd never bothered to check Amazon and find out who the author is. In a sense, you are contributing to Amazon's spoiler-crime. You might wanna edit the post.

Fair point, but this is a marketing move for the general audience rather than some impentrable secret the author doesn't want to get out, like KJ Parker's real identity. Plus Daniel Abraham has commented on it on his blog, so it's not exactly a secret from his perspective either. For the readers of the blogosphere, they're far more likely to pick up a Daniel Abraham-written space opera novel than one by a completely new author as well.

That version of the Erikson collection was published in the UK about 6 months ago. This is just a reprint or something.

Yeah, I have that Malazan collection sitting on my shelves, smiling beguilingly, but it's not at the top of my huge TBR list which right now consists mostly of lots of non fiction stuff for my examns. :)

About the Erikson novella, I think what was widely on sale in the UK was an import of the Tor publication - that's what my one is, bought from Waterstones a couple of weeks ago. Same cover image and similar design, but generally lighter colour tone and a different font for the lettering.

The Bantam one looks better, I have to say, but hey ho.

Hey Adam, GRRM has some new info on A Dance With Dragons on his site you might want to check out.

Yeah, Bantam definitely aren't bringing this out until next month, they've sent out some promo material about it. Clever timing, actually. They don't have STONEWIELDER until November or THE CRIPPLED GOD until February, so they're putting this book out in the 'normal' MALAZAN summer book slot, even putting it in the back of the mmpb of DUST OF DREAMS, as a (good) filler book. Well-timed to keep people ticking over before ICE's new book and then what will (hopefully) be a grand finale to the overall series. And yes, Tor put out their version of the book a little while ago.

With regards to ADWD, my current blog policy is that unless there is substantive news about it, I'm not going to cover it here repeatedly, especially with discussions about it going on over at Westeros and Tower of the Hand, or indeed in the comments section of the same blog entry. This news is interesting, but doesn't tell us anything useful about how close the book is to being finished and when it will be published if it is, which at this point is what I think people really want ;-)