HBO have revealed a very brief teaser for Game of Thrones. The teaser features brief glimpses of Sean Bean as Eddard Stark, Alfie Allen as Theon Greyjoy, Bronson Webb as Will and Richard Ridings as Gared, along with shots of the Dothraki wedding scene and the Stark expedition riding to Winterfell. Westeros.org has an excellent analysis of the trailer here. 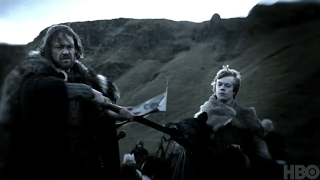 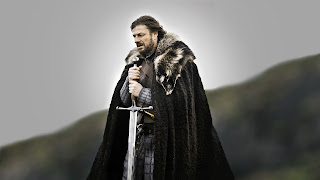 In addition, HBO have added a Game of Thrones-centric subsite and forum to their main website and confirmed that a veteran Dexter director, Brian Kirk, will be handling two episodes of the first season.

Thrones' first season starts shooting on 26 July and will air on HBO around April-May 2011. The BBC are reportedly involved in financing and will air the show in the UK, although a date has not been given as yet.
Posted by Adam Whitehead at 13:06

Bantam are preparing a new edition of A GAME OF THRONES which will be published in February, presumably with a TV tie-in cover. Interestingly, there is so far no sign of them doing the same for Books 2-4.

On that basis, they don't seem to see much value in delaying ADWD until the TV series comes out. People who really like the TV show will rush out and buy Book 1, not Book 5. Bantam and Voyager might bank that they'll buy the books, love them and rush through all four in record time and buy the fifth in hardcover, but it's a bit of an unnecessary gamble, given that ADWD will be a huge bestseller with or without the TV show, and delaying the book further continues to frustrate the existing fanbase.

The official word from Martin, his editors and the two publishing houses seems to be that ADWD's publication date is completion + 3 months.