Civilisation has been destroyed, the human race reduced to a few survivors struggling to eke out a living amidst the ruins of what once was. A man and his son make their way south to the coast, hoping to find warmer weather and more plentiful supplies of food, before the world dies. 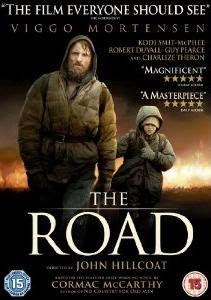 Based on the Pulitzer-winning 2006 novel by Cormac McCarthy, The Road is a post-apocalyptic movie starring Viggo Mortensen as the father and Kodi Smith-McPhee as his son. A number of other established actors have extended cameos, with Charlize Theron playing Mortensen's wife in flashback, Robert Duvall as an old man met on the road and The Wire's Michael K. Williams as a thief, whilst Guy Pearce also appears briefly. However, the film focuses on Mortensen and Smith-McPhee almost exclusively for long stretches of its running time.

The book is notable for its pared-back, stark prose style, which is unflinching in its depiction of the brutalised, battered world and the often savage people that are encountered along the way. The film is similarly cold and stripped-back, with a heavily desaturated colour palette and a certain remoteness to the directing style which only lightens in some of the more emotional scenes between the father and his son. It's a film in which morality without the context of civilisation is questioned, with the son constantly asking, "Are we the good guys?" and the survivors finding their faith (either in God or in human nature), constantly challenged by circumstances. That it addresses this issues with a scarcity of dialogue for a modern film is all the more impressive, and is reflective of the book.

There have been some changes to accommodate the medium of film. There are a few more incidents along the road, maybe a few more characters who appear and interact with our protagonists (though still a bare handful), and there's a couple of moments where cliche rears its ugly head (notably the boy's complete inability to shut up when possible hostile people are around, which I don't recall being so pronounced in the book), though these are mercifully brief. For a post-apocalyptic movie, there's also a near-total lack of modern special effects, with only one incongruous CGI establishing shot in the whole film (although no doubt much more subtle CGI manipulation of images occurs throughout). This adds to the sense of realism. The film is also well-paced and fairly short for a modern picture at about 100 minutes in length. On the minus side, Charlize Theron's character has more screentime than in the book, which you'd expect to mean her character receives more development, but this isn't really the case, and an early scene involving a truck full of nefarious folk up to no good briefly makes you think you're watching Mad Max (for all of about five seconds though, so not a huge issue), which isn't really the tone the creators were going for.

The Road (****½) is fascinating, well-acted, impressively-directed and unflinching, whilst occasionally sounding a note of hope. The film is available now in the UK (DVD, Blu-Ray) and USA (DVD, Blu-Ray).
Posted by Adam Whitehead at 12:57

Great film version of a very special book. Had all I wanted to see on-screen. Very strong acting not only by the main protagonists but also for example by Robert Duvalle, outstanding minutes with him.
The almost-lack of CGI reflects the post-apocalyptic world. Almost nothing remained. So why splurge effects?
The most colorful part of the movie was the end (with a little hope that life goes on) and the bunker scene (where they had enough food to enjoy a few hours of their lifes).
Highly recommended if you are not worried by a depressing but slightly optimistic movie.

I haven't read the book yet, but I enjoyed the movie...if you can really use the word "enjoy" when you're talking about The Road. It is fascinating to watch, but damn it's depressing!

Off topic, but you may like to inform your readers that the prologue and the first three chapters of Brandon Sanderson's Way of Kings are for read on TOR.com. You have to be registered on the site to read them, but that's no big thing.

Dammnit, I didn't want to start another big series, but I guess I'll get that one anyway.