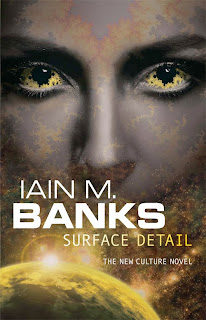 Interestingly, last time I saw news on this book it was an early 2011 release, but seems to have been brought forward to October 2010. The cover blurb:

It begins in the realm of the Real, where matter still matters. It begins with a murder. And it will not end until the Culture has gone to war with death itself.

Lededje Y'breq is one of the Intagliated, her marked body bearing witness to a family shame, her life belonging to a man whose lust for power is without limit. Prepared to risk everything for her freedom, her release, when it comes, is at a price, and to put things right she will need the help of the Culture. Benevolent, enlightened and almost infinitely resourceful though it may be, the Culture can only do so much for any individual. With the assistance of one of its most powerful - and arguably deranged - warships, Lededje finds herself heading into a combat zone not even sure which side the Culture is really on. A war - brutal, far-reaching – is already raging within the digital realms that store the souls of the dead, and it's about to erupt into reality.

It started in the realm of the Real and that is where it will end. It will touch countless lives and affect entire civilizations, but at the centre of it all is a young woman whose need for revenge masks another motive altogether.

This sounds encouraging. I haven't read Matter yet, but by all accounts it is not amongst Banks' best novels. His other Culture books (I still need to re-read and review Excession as well) are much stronger works, so hopefully Surface Detail will be up to the quality of the earlier books in the series.

Definitely do no bother with Matter...far below other works such as use of weapons, excession, player of games. This one sounds good, but Matter sounded good and the subject was good, it was more a problem of execution...we'll see where this one goes.

At Book Expo America about a month ago I spoke to one of the editors from Orbit US and she was very excited about this book publishing. They had a nice poster/placard of the cover, but for the life of me I can't remember if she said it would be publishing late 2010 or early 2011.