2027. A hundred of Earth's most skilled engineers and scientists are dispatched to Mars, braving radiation exposure to land on the Red Planet and establish a permanent scientific outpost. Their goal is to establish whether Mars can ever be a viable target for settlement and colonisation, and if terraforming the planet is possible or desirable. 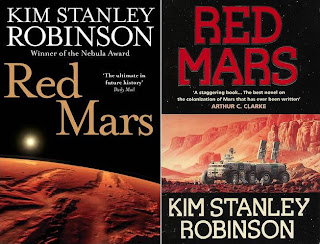 Earth is overcrowded and choking, with national governments and transnational supercorporations (whose annual balance sheets outstrip the GDPs of most of the world's countries) feuding for control. Soon, vast reservoirs of water are discovered in hidden aquifers deep below the Martian surface, making colonies self-sustainable. To the transnats, this means that Mars can become a dumping ground for Earth's excess population. When valuable mineral deposits that Earth is crying out for are also discovered on Mars, then its exploitation for the benefit of the people of Earth becomes inevitable. The resulting clash of wills and desires of the transnational Earth corporations and the beleaguered settlers on Mars forced to accept hundreds of thousands of immigrants they cannot cope with can only have one possible outcome: revolution, and the cry for independence.

Kim Stanley Robinson's epic Mars Trilogy chronicles humanity's colonisation of Mars, beginning in the early 21st Century and extending over a period of some two centuries. The first book, which covers a period of some forty years, sees the initial settling of Mars by the First Hundred, the welcome arrival of additional waves of colonists intent on scientific research and then the more challenging problems of the arrival of hundreds of thousands of economic migrants, refugees and outcasts on a world that is not ready for them, and the resulting tensions between the newcomers and old-timers, and between the authorities on Mars and Earth.

The success of the trilogy as a whole is debatable, but this first volume, at least, is a masterpiece. Robinson's story rotates through a number of POV characters amongst the initial settlers, the First Hundred, and it rapidly becomes clear that most of them are somewhat unreliable narrators. Maya's complaints in her own POV of her 'important problems' being ignored by the base psychiatrist are given another perspective in her friend Nadia's POV, which reveals Maya is more interested in a trivial love triangle between herself and two Americans rather than in the colonisation of Mars, whilst the psychiatrist Michel's POV reveals that he is giving Maya colossal amounts of time and attention (to the detriment of his own mental health) which is unappreciated. Robinson repeats this trick several times, showing that the ultra-laidback and inspirational John Boone (the First Man on Mars) achieves his famous demeanour through the assistance of addictive drugs, whilst self-deprecating Nadia is actually the most universally-respected of the First Hundred. Character is thus built up in layers, from both internal viewpoints and external sources, making these central characters very well-realised (although characters outside the central coterie can be a little on the thin side).

Whilst the characters are important, it is Mars itself which is the central figure of the book. Robinson brings a dead planet to vivid life, emphasising the differences in terrain and character between the frozen northern polar icecap and the water-cut channels in the depths of the Valles Marineris, with the massive mountains of Tharsis towering high into the atmosphere and colonists eagerly staking claims to future beachfront properties in Hellas, the lowest point on Mars and the first place to see the benefits of terraforming. The ideas of Mars as it is now as a pristine, beautiful but harsh landscape and the habitable world it could be are sharply contrasted, and the rights and wrongs of terraforming form a core argument of the novel. I get the impression that Robinson sides with Ann Clayborne's view that the planet should be left untouched, but he is realistic enough to know this will not happen, if Mars can be settled and exploited in a way that is economically feasible. Mars in this work becomes a success of SF worldbuilding to compete with Helliconia and Arrakis, losing only a few points for actually existing.

On the downside, Robinson hits a few bad notes. Some of these are unavoidable consequences of the book being nearly twenty years old. Even in 1992 the notion that the Chinese would not play a major role in the financing and undertaking of a Mars colonisation mission only forty years hence was somewhat fanciful, but today it is almost unthinkable. More notably, the global recession has made the possibility of a manned mission to Mars, let alone a full-scale colonisation effort, by the 2020s somewhat dubious. Of course, these are issues Robinson could not hope to predict in the optimistic, post-Soviet Union years of the early 1990s. 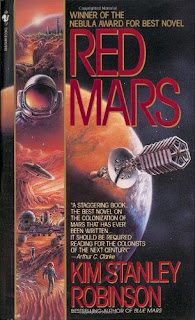 Other problems are more notable. Robinson goes to some lengths to make the pro-terraforming and anti-terraforming sides of the debate both understandable and intelligent, but his political sympathies are much more one-sided. The pro-Martian independence brigade have charismatic leaders and a grass-roots movement of plucky, honest-men-against-the-machine supporters to their name, whilst the pro-Earth-control movement is led by a fundamentalist conservative Christian and resorts to weapons and mass-slaughter extremely easily. Robinson, to his credit, recognises this problem in later books and tries to repair the damage somewhat (Phyllis, presented extremely negatively in Red Mars, is shown in a more sympathetic light in later volumes), but there remains a feeling of political bias in this first volume. In addition, it sometimes feels that Robinson really wants the reader to know about the years of research he put into the book, with tangents and divergences which make the book feel like half a novel and half a factual science volume on how the possible colonisation of Mars might happen. For those fascinated by the real-life plans to terraform Mars (like me) this isn't an issue, but for some it may be. It is also, by far, the biggest problem the sequels face.

Nevertheless, the sheer, massive scope and complexity of Red Mars makes up for this. There is an overwhelming feeling running through this novel unlike almost any other hard SF novel ever published, that this might actually happen. Maybe not as soon as 2027, maybe not with such a determined push towards colonisation and terraforming right from the off, but one day, barring the collapse of our civilisation, we will go to Mars, and many of the challenges and problems faced by the First Hundred in this book are issues that will need to be overcome to make that possibility a reality.

Plus, and this cannot be undervalued, the dry and more sedentary tone of the earlier parts of the book are made up for by the final 100 pages or so, which contains one sequence which ranks amongst the most memorable and stunning moments of SF imagery achieved in the history of the genre to date. Robinson may have the image of being a bit of a laidback Californian optimist, but he sets to blowing stuff up at the end of the book with a relish that makes even Greg Bear look unambitious.

Red Mars (****½) is an awe-inspiring feat of SF worldbuilding and a vital novel on the colonisation of our neighbouring world, let down by a few moments of naivete and simplistic straw-manning of political points of view not to Robinson's liking. Overcoming this, the central characters are fascinating, the sheer scope of the book is stunning and the climatic revolution sequence is dramatic and spectacular. The novel is available (with a nice new British cover) in the UK and USA.
Posted by Adam Whitehead at 19:36

I don't know. I read this book a few years ago and I was left unimpressed enough that I never felt the need of continuing with the rest of the series.

Maybe I should give it a second chance.

Great review Werthead. One more series to add to the pile.

So you're not recommending the other two books in the trilogy? Should I read Red Mars and leave it at that?

GREEN MARS and BLUE MARS are both reasonably good books, but they are much more scientific treatises on how the terraforming of Mars than dramatic works of fiction. They are much slower-paced than RED MARS and lack the most memorable characters from the first book (Robinson having killed most of them off).

That said, Robinson's writing style remains strong and the worldbuilding is stunning. And I will review both of them, they're just going to be mixed up with reviews of other books in the meantime.

Great review. I kind of want to try re-reading this, it's been a while and I probably didn't pay it as much attention as I should back when I read it.
I remember struggling through the sequel but being ultimately satisfied with making the effort of finishing them :)