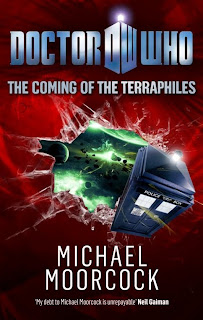 Yes, Michael Moorcock has written a Doctor Who novel, and, more than that, a Who novel with nods to his Eternal Champion multiverse, if the blurb is anything to go by:

Miggea - a world on the very edge of reality. The cusp between this universe and the next. A point where space-time has worn thin, and is in danger of collapsing. And the venue for the grand finals of the competition to win the fabled Arrow of Law. The Doctor and Amy have joined the Terraphiles - a group obsessed with all aspects of Earth's history, and dedicated to re-enacting ancient sporting events. They are determined to win the Arrow. But just getting to Miggea proves tricky. Reality is collapsing, ships are disappearing, and Captain Cornelius and his pirates are looking for easy pickings. Even when they arrive, the Doctor and Amy's troubles won't be over. They have to find out who is so desperate to get the Arrow of Law that they will kill for it. And uncover the traitor on their own team. And win the contest fair and square. And, of course, they need to save the universe from total destruction.

Readers of Moorcock's work will of course be familiar with the name Cornelius and the concept of the Arrow of Law. Interesting to see if these are just shout-outs to his established mythos, or play into the story in a bigger way.

Moorcock comments on the reasons for writing a TV tie-in novel here.

The book will be released on 28 October in the UK and 30 November in the USA.
Posted by Adam Whitehead at 18:34

you mean moorcock. THE MASTER OF S&S, has written a DOCTOR WHO novel?

now usually look down upon tie-in novels and avoid them like the plague, but this nevertheless fascinates me. [and im not even a fan of doctor who fan].