TORCHWOOD re-commissioned as a UK-US co-production

The BBC and American cable network Starz have agreed to join forces to produce a 10-episode fourth season of Torchwood. The new season will build on the format established by the third season, Children of the Earth mini-series event, with the season forming one serialised storyline that the characters get involved with. According to executive producer Russell T. Davies, the story will be concluded at the end of the season. The storyline will revolve around a new threat to the world arising that sees American intelligence agents being assigned to resurrect the Torchwood organisation, with the help of Captain Jack and Gwen Cooper. 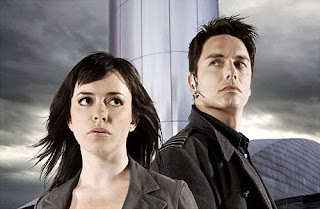 The new format follows talks between Davies and Fox to develop a US-centric version of Torchwood, which eventually came to nothing. The new deal is a co-production, with the resulting series likely to air on Starz in the USA and BBC-1 in the UK. The series will have a significantly bigger budget than previously, with filming set to take place in the USA and other countries around the world. It's unclear when the new season will air, but will likely be some time next year.
Posted by Adam Whitehead at 11:46

Email ThisBlogThis!Share to TwitterShare to FacebookShare to Pinterest
Labels: doctor who, news, torchwood