Over the past thirty years, one of the biggest-selling historical series around has been the Earth's Children sequence by Jean M. Auel. With sales of 45 million for the five existing books, it is one of the most popular series of books of recent times (slightly outselling Robert Jordan's Wheel of Time sequence in total numbers and radically outselling it in terms of sales per book, for example), although also one of the longest-gestating. The publishers have confirmed that Auel has handed in the manuscript of the final novel and are planning an ambitious multi-territory launch (which so far stands at eleven countries). 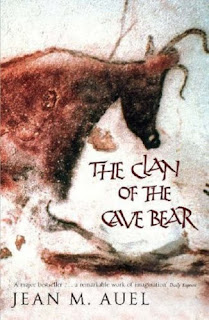 The books are set approximately 30,000 years in the prehistoric past of Europe, and chronicle the rise to supremacy of Cro-Magnon humanity over the fading Neanderthals. The previous books in the series were The Clan of the Cave Bear (1980), The Valley of Horses (1982), The Mammoth Hunters (1985), The Plains of Passage (1990) and The Shelters of Stone (2002). The final book will be entitled The Land of Painted Caves and will be released on 29 March 2011.

I haven't read any of the books, but according to reports they centre on a young woman who is raised by Neanderthals, is exiled and spends enormous amounts of time having sex, as you probably would in caveman times if you were feeling pretty bored. Reviews of them appear to be somewhat mixed, to say the least, but this will certainly be a high-profile release next year.
Posted by Adam Whitehead at 22:59

So the first three books are released fairly quickly, then the 4th one takes twelve years to come out? OK, no more complaining about a Dance of Dragons' delay until 2017. :)
On a more related note, I remember seeing this series in various libraries and never getting particularly interested in the idea. Reading your description puts me off it even more, but maybe I should see what it's really like, just as soon as I finish Perdido Street Station...

I read most of the ones available when I was a kid and really enjoyed them then, but not sure I'd bother now. Heard the 2002 one was much poorer than the previous books so I wouldn't hold out much for a good ending to the series either.

Adam, she also single handedly invents everything mankind came up with, besides being a healer, shaman, prophetess and whatnot. :)

The first book was really, really good. Unfortunately the following books became progressively worse, and the reason is (in my opinion) the introduction of Jondalar.

Yeah, Jondalar the Sex God. It started reading like a Mary Sue fanfic after that.

You will probably not enjoy this book if you are not at least a 35+ Western female.

Hi, I'm neither 35+ nor am I western. But I enjoyed the books tremendously. Yes the books did become some of a drag as the series went on because Auel had to keep retelling all the previous events into the new book. You could read the last book and still know what happened pretty clearly in any of the other series. It is a both a draw back and an advantage. I do look forward to the final book in the series and hope that Ayla finds either her initial People or finds her son, who she is always been pining about in the whole of the series.