Doctor Who Adventures: Blood of the Cybermen

In the Arctic, a research team have stumbled across something buried under the ice. A few days later the team are scattered or killed, and it's up to the Doctor and Amy, newly-arrived in the TARDIS, to find out what's been going on. 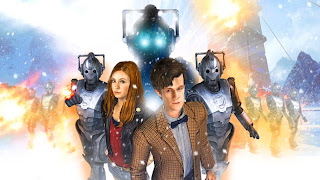 Blood of the Cybermen is the second of four games in the Doctor Who Adventures series, an episodic series of games where you control the Doctor and his companion and take part in fresh new adventures. The games are aimed at a family audience, so violence and shooting things is out and puzzle-solving and overcoming problems with your wits (and occasional deployment of the sonic screwdriver) is in.

This second game is a notable improvement over City of the Daleks. There are fewer annoying mini-games and the ones that are present are puzzles based around logic, rather that tedious maze games. The setting is also more evocative, with the icy Arctic landscape and the isolated base cut off from the rest of the world being a classic Doctor Who staple. There's even some references to The Thing (the Doctor is a Kurt Russell fan!), although disappointingly there was no mention of The Tenth Planet (the very first Cyberman story from 1966, set at an isolated base in the Antarctic). This story is also satisfying for reintroducing the 'real' Cybermen from the Doctor's universe, rather than the Cybus-derived cyborgs from the parallel universe seen in the new series, although for reasons of time and cost they still use the same design as the Cybus ones. The Cybermats also return for the first time since the 1975 TV story Revenge of the Cybermen.

As with the first game, the writing is decent, capturing the characters from the TV show quite well, and the TV actors continue to turn in a good performance, even if Matt Smith's tendency to half-whisper his lines remains. There's also more of an equal divide between playing as the Doctor and playing as Amy, with the two having to work in tandem to solve several puzzles (giving rise to the thought that a co-op version of the game could be fun). Aimed at a family audience, including young children, the game isn't going to tax veteran gamers for too long, but there are several surprisingly disturbing moments (mostly related to how humans are converted into Cybermen) and some nice continuity nods which should keep adult fans of the series satisfied as well.

Overall, Blood of the Cybermen (****) sees the developers learning from the mistakes of the first game and moving on to produce a more interesting, original and far less annoying game. It is available - for free for UK players - now from the BBC website.
Posted by Adam Whitehead at 11:50