At Comic-Con, Patrick Rothfuss reported that The Wise Man's Fear has come in just short of 400,000 words, making it larger than, for example, any book in the Wheel of Time or Malazan series. He remains very confident of the planned March/April release slot. 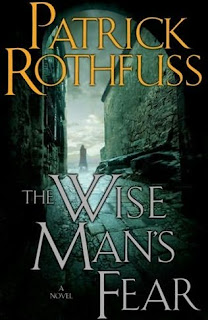 A sinister hooded figure, made even more mysterious by being painted very, very small and put in a location where he looks like he's assessing the mould damage.
The new Avatar series, The Legend of Korra, is apparently only planned to be a 12-episode mini-series at the moment rather than an ongoing serial.

At the Battlestar Galactica panel, several actors and one of the writers hinted that we might be seeing the BSG characters again in some form. Meanwhile, the second half of Caprica's first season has been pushed back to January 2011. SyFy are apparently still debating whether to renew the series.

StarCraft II is released tomorrow. The United States defence department would not be drawn if the current naval exercises off the coast of the Korean peninsular were planned specifically to deter a North Korean invasion as millions of South Koreans skive off work to play the game, leaving the country dangerously distracted by Zerg rushes and mastering the new units.

Filming of Season 1 of Game of Thrones commences today in Belfast and will continue through to January 2011, with transmission a few months later. Good luck to the cast and crew!
Posted by Adam Whitehead at 10:23

Good news on the Rothfuss front. 2011 is going to be one of the better years for sf&f in a long while.

I'm really excited about Rothfuss's next book. I agree with PeterWilliam, 2011 is looking to be one hell of a good book year.

Hmm...few months into 2011 for GoT. Makes sense. I was hoping it'd begin not long into the new year. How long are we expecting it to for - throughout next summer?

Filming of the series should conclude in early-to-mid January 2011. It will then go into post-production, with special effects added and so on (although they may have started that earlier for completed episodes).

The air date is unclear. Previously HBO had said they wanted it on before TRUE BLOOD Season 4, possibly partnered with TREME Season 2, so maybe starting in March or April 2011. However, more recent comments have suggested that they're thinking about moving it later, maybe partnering it with TRUE BLOOD for a fantasy one-two punch, which would put the start date back to June 2011.

My suspicion is that they'll try to go earlier, maybe timing it so that THRONES ends the week before TRUE BLOOD starts to try to encourage people to keep their subscriptions going all year round rather than just subbing whilst those two shows are on and then quitting until the following year.

KORRA: a 12 ep MINI SERIES? THAT SUCKS>: adam, please say it aint true. judging from that promo image, we may have another epic on our hands. besides it has STEAMPUNK! A BADASS HERIONE FROM THE WATER TRIBE!! ANTI-BENDING GROUPS!!! and best of all, AANG's SON!!!!! SO WHY ONLY 12 EPISODES.

I suspect that the 12-episode mini-series thing might be a 'back-door pilot'. If it's a success they may choose to do a full series afterwards.

However, one of the reasons I think AVTAR was so good was that the creators had a set timeframe in mind: three seasons and done. I'd rather they do the story in the time they want to rather than have to fill it out too long.