Just to prove, if there was any further doubt, that the South Koreans are totally insane when it comes to all things Blizzard, they've stuck Jim Raynor from the StarCraft games on the back of a Boeing 747. 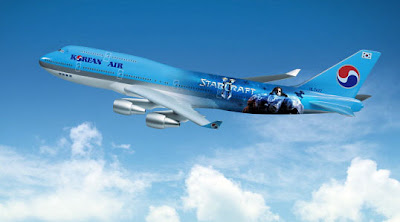 "In the pipe, five by five."
Oh yeah, and they're giving away a copy of StarCraft II absolutely free to every single South Korean who has an active World of WarCraft account.

StarCraft II: Wings of Liberty, the most eagerly-awaited sequel in computer gaming history (in this house anyway), is released on PC and Mac on 27 July.

Do the Japanese still have that plane with a Pikachu on the side? Also, Blizzard must hate everyone in South korea to come up with a way to get them onto WOW.

Absolute madness... but somehow, sublime. Why don't the British taxpayers get games bought for them by the government, eh?

I live in Korea and Starcraft is a religion here. The fact that they are handing out games in no surprise. We have two, yes TWO television channels dedicated to people playing the original Starcraft is proof enough. No idea why people watch it but I know people who do nightly.