The previously-unveiled UK cover for The Heroes was a placeholder reusing some of the art elements from Best Served Cold. For the first time, here's the current draft of the actual cover itself: 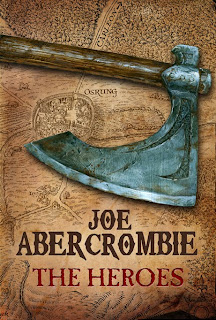 Nice. Obviously in a similar vein to Best Served Cold, with a weapon and a map, but it works quite nicely. The Heroes is due for release on 20 January 2011 in the UK and a few weeks later in the USA.
Posted by Adam Whitehead at 09:39

So is this set in the same world as The First Law Trilogy and Best Served Cold then?

Yup. It's set in the North and sees another conflict between Union forces and a group of Northmen. Some FIRST LAW and BSC characters feature.

Nice cover art, indeed.
I very much like the style of the cover art they're using for entire series.
I guess if you look at them ten or twenty years from now, they should've aged much better than the omnipresent hooded figures! ;-)

Somewhat off-topic, but your link to Joe's website is broken. (in the sidebar)