Four years have passed since the Brood War. The Koprulu Sector is struggling to rebuild from the cataclysmic conflict that left the Terran Dominion and Protoss Empire weakened and Kerrigan in uncontested control of the Zerg as its Queen of Blades. The Terran Emperor, Arcturus Mengsk, finds his rule being contested by the rebel Jim Raynor, his former ally who turned against him when Mengsk betrayed Kerrigan to the Zerg. 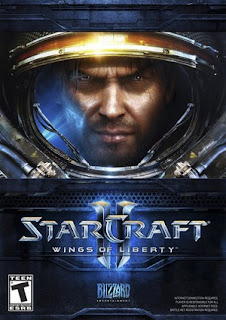 Raynor's low-level rebellion is taken up a notch when he is joined by an old friend, Tychus Findlay, and the Zerg unexpectedly return to launch a series of raids on human worlds. As Raynor furthers the cause of Mengsk's downfall, he also receives an unexpected 'gift' from his old Protoss ally, Zeratul, and learns that a much greater threat is lurking on the horizon...

StarCraft II: Wings of Liberty is the sequel to the 1998 game StarCraft and its expansion, Brood War. The game has been released twelve years after its predecessor, during which time StarCraft has gone on to become the biggest-selling strategy computer game of all time and, bizarrely, become a national sport in South Korea, where multiplayer matches are televised and its top players are minor celebrities. It would be fair to say the game has a lot hopes and expectations riding on it.

StarCraft II is very much a game of three parts. The multiplayer, which is fast, furious and satisfying, is one part of this. However, that part does not develop far beyond what was achieved with StarCraft. There's some new units and a much more flexible interface, but broadly it's a shiny 3D make-over of the old game. It's the single-player part of the game which has received the most changes from the original.

For a start, almost the entire game is devoted to the Terran faction alone, save a four-mission side-story where you control Protoss forces. You play Jim Raynor, continuing on his quest to destroy the Dominion whilst being haunted by guilt over his failure to save Sarah Kerrigan from the Zerg in the first game. Rather than simply following a pre-set list of missions, the single-player game is much more oriented around player choices. Depending on circumstances, the game has a between-mission, RPG-like section set on one of three different locations (in a bar on Mar Sara for the first few missions, then on the battlecruiser Hyperion for most of the rest of the game, and then 'somewhere else' for the last few missions). In this section you can catch up on news reports, talk to crewmembers and allies, research new upgrades for your units, purchase new abilities and hire mercenaries. You can also play a mini-game called Lost Viking (a vertically-scrolling shoot 'em-up), listen to the jukebox or indeed just chill out in the bar.

When it comes time for the next battle, you are given a list of several different missions you can tackle (usually three at a time). You can approach the missions in any order you wish, but you get different research points (unlocking new units and abilities) and new unit deployments depending on the mission you take. A player eagerly wanting to get his hands on Siege Tanks will take a different route through the game than someone anxiously wanting to research Tech Reactors (allowing buildings to construct two units simultaneously and unlocking all of their upgrades), for example. There are also some minor storyline and dialogue changes based on what missions you do. You can also steam straight through to get to the final mission and simply choose not to do a whole bunch of missions, but I heavily recommend against this. For the final mission you really do need every unit and every upgrade you can get your hands on.

As a bonus, you also have access to a Protoss 'memory crystal' which allows you to relive Zeratul's investigations into the revelations of Brood War, giving you control of Protoss forces for several missions (the last of which is, impressively, an apocalyptic vision of the fate of the entire sector). This section is also optional, but does set-up storyline points that I suspect will become much more important in the two planned expansions, Heart of the Swarm (focusing on the Zerg) and Legacy of the Void (focusing on the Protoss).

As a single-player experience, the game does not spare any expense. The between-missions RPG stuff is excellently done, with it being possible to spend 10-15 minutes between missions simply talking to everyone, upgrading and researching new gear and ruminating over what mission to tackle next. These sequences are accompanied by in-engine cut scenes which further the story and characterisation, and really take the original StarCraft's most notable achievement (satisfyingly telling an epic but character-based story in a strategy game environment) to the next level. It's very impressive, despite the often cheesy dialogue.

The game itself does not stray too far from the original, although of course the graphics are much nicer and shinier. There's a whole metric ton of interface improvements which I suspect will make playing the original game without them a lot harder, such as the ability to build infantry and have them report immediately to a bunker, or train new SCVs and have them sent straight into mining without the need for extra micro-management. The 'guard' mode from the original game is now much-improved and allows you to send SCVs and medics with your attack force. They'll (mostly) stay out of the enemy's line of fire but remain close enough to repair and heal on the fly as needed. Individual mission design is varied but highly entertaining, ranging from a Firefly-influenced mission where you have to intercept a bunch of futuristic trains and nick some stuff from them to what a lot of people are already talking about as the game's high point: a 'zombie' or Pitch Black-inspired level where you have to go out and work during the day but then retire behind fortifications at night when you are swamped by light-sensitive enemy forces. In fact, every mission has at least one little difference to set it apart from others, resulting in a constantly varied, sometimes surprising gameplay experience. 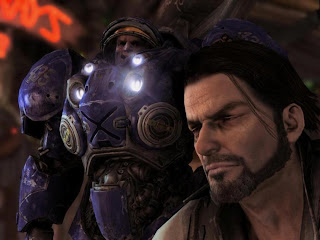 The unit roster is larger than the original game's, allowing much more flexibility. Relying on just one unit was possible, if a little dangerous, in the original game but is a much less viable strategy here. Unfortunately, the larger roster means that the differences between some units is slight, and some units tend to be disregarded and never used as a result.

The game builds over the course of its length to an apocalyptic final set of missions which are impressive in their epic scope. However, the game unexpectedly ends in a somewhat neat manner. Given that two expansions are forthcoming I was expecting a major cliffhanger, but the finale could have served as a simple final ending with no major problems. Sure, there's clearly more stuff to come, but it's a pause rather than a cliffhanger, which given the indeterminate amount of time before Heart of the Swarm is released, is a good thing.

On the downside, the game is fast, frenetic and fun, but there are moments when you do have to acknowledge that it isn't innovative. Several RTS developments from the past ten years are ignored, and the game sometimes does feel like a very high-quality WarCraft III mod down to the feeble zooming-in button and the lack of realistic terrain. However, most of the time you are too busy playing to really focus on this aspect. The other issue is that the charming, slightly cartoony style of the cut scenes and between-mission discussions in the original have been replaced by more of a 'realistic' look, which drops Jim Raynor and his buddies squarely into the uncanny valley. It's not as bad as most games (and light-years beyond the likes of say Oblivion), but still somewhat disconcerting. 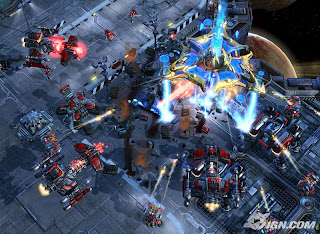 In addition, the game requires a one-time Internet activation (although you need to stay online to get the game's various achievements) and the original game's more approachable multiplayer aspects have been removed, most notably LAN play and the ability to spawn a lightweight version of the game on a friend's computer without having to buy additional copies. These are irritations rather than anything particularly deal-breaking for me, but others clearly feel otherwise.

However, a very common complaint, that this is only a 'third of a game', is more puzzling. StarCraft II is longer, more varied and more epic than the original game, and certainly moreso than any other real-time strategy game released in the past dozen years. It will take most players between 10 and 20 hours to complete, which is a very healthy amount of time for a modern single-player game, and of course the game editor, mods and multiplayer modes (where you have control of all three factions) extend the game's lifespan exponentially. If there was ever a time when a 'complete' strategy game consisted of 90 single-player missions taking 60+ hours to finish, one of the most powerful game editors have shipped, hours of cut scenes and extensive multiplayer, it must have passed me by. Certainly the original StarCraft was nothing like that at all.

StarCraft II: Wings of Liberty (****) tends towards the conservative end of the spectrum for a sequel, but its impressive storyline, satisfying and varied gameplay and toweringly impressive polish more than make up for it. It's a powerful statement of faith by Blizzard in the so-called 'dying' PC games genre and is immensely impressive. It is available now on PC and Mac in the USA (standard, collector's edition) and UK (standard, collector's edition).
Posted by Adam Whitehead at 16:50

Interesting review, Wert. It's a game I've kept my eye on for a while, and I also find the "third of a game" cries to be somewhat uninformed. Blizzard have said for at least a year or two that StarCraft 2 is too big to be one game, and if "splitting" it up like this is what's needed to give a higher quality then so be it.

Sadly, I'm likely not going to purchase this for some time. Partially because I'm anti-Activision and their pricing schemes, but secondly because I can't afford ;)

Still, it sounds great and I hope I enjoy it! :D

I'll probably post a review soon, but I've been playing it for three days now and the game rocks. I appreciate that they did not deviate from the basic gameplay platform as well.
And yes, I picked it up Monday night at midnight. After twelve years of waiting, I had to purchase my copy the moment it was available!

Interesting review and thanks for sharing the details. I am tempted to check it out, but ultimately I simply despise Blizzard too much for the abomination that is WoW and the fallout it has had on the rpg industry to purchase any of their products.

It's a fun game, and I agree wholeheartedly with your commentary on the single-player mode.

Slight side-note, but it seems like they did some pretty massive retcons with this game to the original Starcraft setting. Brood War ended with most of the Koprulu Sector utterly devastated (including many of its key worlds, like Tarsonis), yet in four years, it's as if forty years have passed.

There are some elements like that. Mar Sara somehow still having a breathable atmosphere when the Protoss burned the entire planet from top to bottom was a bit puzzling.

The biggest and most unbelievable thing was Korhal going from a nuked-out ruin before SC1 started, to a desert-but-still-inhabitable world in BROOD WAR to apparently Coruscant in STARCRAFT 2, just four years later. Either Korhal is about twenty miles across or they totally ballsed that up.

I haven't played the gsme yet, just hear it from my friends. And it seems exciting.