The Named Lands continue to suffer tumults in the aftermath of the rise of the Machtvolk and the birth of Rudolfo and Jin's son, who it is prophesied will save the world. Vlad's quest to unearth the true nature of the threat to the Named Lands leads him deep into the equatorial oceans and a startling discovery, whilst deep in the Churned Wastes Nebios discovers the path to his true destiny, and a fateful encounter with the enigmatic antiphon. 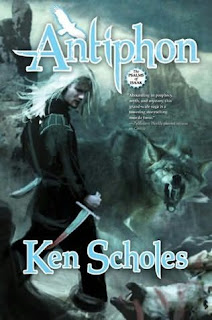 Antiphon is the third and middle volume of Ken Scholes' five-volume Psalms of Isaak series and suffers acutely from 'middle volume syndrome'. There's an enormous number of scenes where people sit around and talk about the plot or, rather more oddly, stand around and have lengthy internal monologues about the plot rather than getting on with business. There's also a continuation and indeed expansion of the number of scenes where people 'in the know' about what's going on stand around and make smug, enigmatic pronouncements about events and the clueless protagonists refuse to ask what is going on. If Scholes had become a screenwriter, he'd have made an excellent addition to the Lost writer's room.

On the plus side, several of the characters continue to be engaging (not Rudolfo or Jin this time around, as they are both pretty inert for most of the narrative, one startling moment for Rudolfo aside), most notably Winters whose character arc is the only one in the book which has sense of momentum and vigour to it. Isaak, somewhat under-used in the previous volume despite giving the series its name, also has more to do this time around, which is welcome. There are also several moments where Scholes' writing comes alive and gives us brief bursts of awed wonder of the kind that SF and fantasy can do so well (most notably one sequence involving a ladder).

Unfortunately, these moments are few and far between. Scholes is aiming for something different and more interesting than the traditional fantasy series here, and his ideas are excellent. The problem is that the execution and writing is frequently lacklustre and occasionally even skirts the edge of being bland. Considering the solid pace of the previous two volumes, all the character naval-gazing that goes in this book (still only 370 pages long) also bogs down the narrative at the moment it should be gearing up to deliver us down the home straight of the final two books to the conclusion.

Antiphon (***) remains engaging enough for fans of the previous two books to enjoy, but the series feels like it's running out of steam. I hope this is just a teething issue and Scholes will return strongly in Requiem. The book will be published in the United States on 14 September 2010.
Posted by Adam Whitehead at 11:02

Email ThisBlogThis!Share to TwitterShare to FacebookShare to Pinterest
Labels: antiphon, ken scholes, the psalms of issak

You're review was accurate and really well written. Thanks.