Having vanquished the evil ghost pirate LeChuck, Guybrush Threepwood's life seemed to be on the up. Unfortunately, his girlfriend Elaine has dumped him and his attempts to dine out on his former adventures forever seem to be wearing a little thin. Guybrush resolves to undertake a fresh new adventure: to find the legendary treasure of Big Whoop. To this end he travels to Scabb Island, only to find it under the tyrannical rule of Largo, a former lieutenant of LeChuck's who is searching for a way of resurrecting his old master. If Guybrush is to find Big Whoop, he must lift the Largo Embargo and search the Caribbean for the four map pieces which, legend has it, will lead him to the treasure. 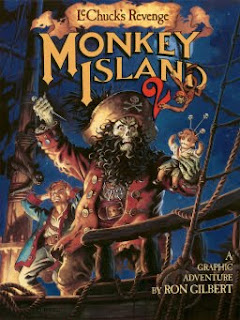 Monkey Island 2: LeChuck's Revenge was originally released in 1992 and is pretty much the single finest graphic adventure game ever made (despite very, very stiff competition from Day of the Tentacle). Released just a year after its predecessor, the sequel dwarfs it in every respect. It's much larger, more than twice as long and features a much larger cast of characters. It's also considerably more difficult, with the greater number of locations, items and puzzles meaning that some hefty lateral thinking is required to solve the game's conundrums if you don't want to resort to spending half an hour combining every item in your inventory with every clickable object on every screen until you stumble on the answer. Luckily, the game rewards logical thinking, with arguably only one extremely obtuse and random puzzle in the whole game (involving a metronome-mounted banana, a hypnotised monkey and a giant faucet).

Monkey Island 2 also uses a more interesting structure, with the game initially limited to one small playing area which then expands, in the second act, to a much vaster free-roaming section where you can visit different islands and undertake different jobs and puzzles in any order you wish until you complete your objective, and then the plot narrows down again towards the denouncement. Obviously BioWare were paying attention to this, as they later used the same structure in almost every single one of their games. That's because it works pretty well, giving you the semblance of freedom in the second act to explore, meet new characters and do more stuff at your own pace. It would have been quite nice to have seen some more optional stuff in this section (pretty much everything you do is necessary to further the plot and game objectives), but I suppose that is why Monkey Island 2 is an adventure game, not an RPG.

As with The Secret of Monkey Island, the game has now been reissued in a new Special Edition, with completely re-recorded music and full voice acting for every line of dialogue in the game (given the amount of it in the game, this is very impressive), using the same voice cast as Curse, Escape and the Monkey Island 1 special edition. Graphically, the game has been completely updated to HD standards, which must have been an fair amount of work given its size, and the quality of the artistic update is superior to the previous special edition. This appears to be because the original concept art and storyboards from the second game were far more detailed, allowing it to be scanned and updated more efficiently and faithfully. As with the first game, you can hit a button at any time to replace the game graphics and sound with the originals and you now have the option to mix the old graphics and new voice-overs. There are also more extras, such as a ton of concept art (for both the special edition and the original game) and a voice-over commentary from original creators Ron Gilbert, Tim Schafer and Dave Grossman, which is intriguing but rather lacking in depth.

On the minus side, the original classic intro sequence has been removed (the bit with the dancing monkeys) and there have been a few (and thankfully only a few) 'tweaks' to the dialogue, with a few new in-jokes and dialogue options added. The casual player and even most of the dedicated fans (I count myself amongst the latter, having played the game to completion at least a half-dozen times in 1992-96 before my Amiga stopped working and I moved onto PC) won't have a huge problem with this, but extreme hardcore fans will likely be up in arms over it, despite the fact there's nothing stopping them playing the actual original game on DOSBox.

Unfortunately, control issues remain. The same clunky system from the first special edition has been retained, although keyboard shortcuts have been added for the PC version, making things slightly easier. The control system is actually much more problematic for Monkey Island 2, which is several times dependent on time-limited puzzles, where you sometimes have to combine items in your inventory and then use it with an on-screen object in the space of a few seconds at best. Hitting F1 and switching to 'classic' mode and using the superior menu system from the original game is often the best way to achieve this. This is particularly noticeable in the game's extended final confrontation between Guybrush and LeChuck, where the inability of the new control system to cope with several time-constrained puzzles in rapid succession becomes so frustrating you may have to resist the urge to fling your monitor through the nearest window.

But, returning to the good points, Monkey Island 2 is still a stunning game. The graphics are gorgeous. In this 3D-driven age, there is something to be said for the simplicity of painted backdrops, especially now re-rendered in HD. The writing is smart and funny, the puzzles are intelligent and well-conceived, and the game is long and complex enough to be challenging without ever getting too frustrating (the aforementioned 'monkey wrench' puzzle excepted). The biggest surprise on revisiting the game is that I have gained a greater appreciation for the highly divisive ending, especially spotting the little hints that the game has been dropping for a while that something isn't quite right, not just in the plot but with the entire Monkey Island universe. The metaphysically mind-blowing ending, which comes across like Gene Wolfe taking over a Terry Pratchett novel in the last quarter, is still one of the boldest and possibly most suicidal risks I've ever seen a computer game take (only exceeded by Planescape: Torment). It was controversial and unpopular in 1992 and it remains so now, especially since The Curse of Monkey Island (the third game, held by some purists to be non-canon due to the non-involvement of the original programming team, despite being a fine game in its own right) brushes it under the rug fairly quickly by simply going for the most obvious solution.

Monkey Island 2: LeChuck's Revenge (*****) is available now for PC and X-Box 360, with iPhone and iPad versions available from the Apple store.
Posted by Adam Whitehead at 00:11