The most powerful city of the Named Lands is Windwir, home of the Androfrancine Order and their attempts to rebuild the lost technology and wisdom of ancient times. Then Windwir is scoured from the face of the world by ancient sorcery, throwing the Named Lands into turmoil. The scattered remnants of the Androfrancine Order have become divided over the succession of the Pope, whilst Rudolfo, Lord of the Ninefold Forest Houses, falls into conflict with Sethbert, Overseer of the Entrolusian City States, over who is to blame for the disaster. 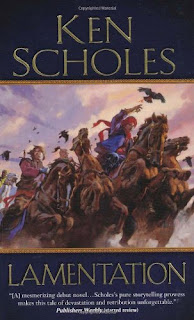 From the south, House Li Tam is manipulating events to its own ends, whilst in the north the enigmatic Marshfolk see the destruction of Windwir as a sign that their long exile may be coming to an end. Amongst the ruins of Windwir an old man and a young boy find their destinies united as they seek to bury the remains of the dead, and a mechanical lifeform is uncovered who holds the key to the secrets behind the disaster.

Lamentation is the first novel in The Psalms of Issak series, a five-volume sequence. The series is epic fantasy filtered through the Dying Earth subgenre with just a dash of the New Weird thrown in for good measure. The setting is a post-apocalyptic world where people imperfectly try to understand the science and sorcery of what came before.

Ken Scholes's debut novel is an effective first book. It is fairly short by genre standards (350 pages in length) and is well-paced. There are a lot of interesting ideas being worked on here, with the author skirting close to some deeper themes on religion, knowledge, power and responsibility, although the book's short length and fast pace means that these cannot be explored thoroughly. These flashes of extra depth hopefully hint at some more intriguing things to come in the latter four volumes.

As it stands, Lamentation is a solidly enjoyable fantasy novel. The prose is brisk and effective, the characters sympathetic and relatable even if some of them are a little on the thin side. The two central figures of Rudolfo and Jin Li Tam are not quite satisfyingly developed in the book and both come across as a little too perfect for comfort. Other characters such as Petronus, Neb and the metallic and titular Issak are far more interesting. Jin's father, who emerges as a figure of some importance, is also over-the-top in the psychohistorical levels of his forward planning and contingencies, which starts to become vaguely comical towards the end of the novel, eliminating tension as the next disastrous turn of events is defused by, once again, Jin's father having already foreseen it and worked out a counter decades previously.

In addition, the worldbuilding is somewhat lacking. Scholes's abilities with description are good, such as his evocation of Windwir's transformation from bustling city to a vast tomb, but he never really convincingly suggests that much of a world exists beyond the bubble the characters travel around in. This is not helped by the fact that the area on the maps is apparently traversable in just a few days yet stretches from a frozen waste in the north to tropical lands in the south.

What Scholes does have is a readable, page-turning style, some nice and unexpected plot twists, some solid and well-drawn characters and a nicely different, vaguely steampunk-influence setting to the standard epic fantasy template.

Lamentation (***½) is a flawed novel, but enough good points shine through to make reading on worthwhile. The book is available now in the USA but does not have a current UK publisher. It is available on import.
Posted by Adam Whitehead at 17:07

Email ThisBlogThis!Share to TwitterShare to FacebookShare to Pinterest
Labels: ken scholes, lamentation, the psalms of issak

The sequel Canticle will solve many of the problems you had with Lamentation. A lot more world building happens and you leave The Named Lands and visit a couple other places. It is well worth you checking out.

I actually agree with everything that you said. The only thing I'll add is that the idea that Issak and his other cyborg brothers can cry is an awesome feature of the world.

I enjoyed it, but it wasn't something I was chomping at the bit to continue.

Isaak is definitely the stand-out character of the first book. Also, the mech-bird which opens the book reminded me of the clockwork owl in CLASH OF THE TITANS (the original), which was cool.

"Conan what is best in life?"
"To crush your enemies, see them driven before you, and to hear the lamentation of their women!"

I didn't like this one at all. Scholes undermined the suspense of his tale numerous times, and some of the character relations were far too neat and strained credibility. Also, I think the brief, constantly shifting POVs grew ever more tedious as the plot progressed.