The Third Age Development Team have released Version 2.0 of Third Age: Total War, their total conversion of Medieval II: Total War and its expansion Kingdoms. Appropriate timing, as we are close to the eightieth anniversary of J.R.R. Tolkien starting to write The Hobbit (now probably not coming to a movie screen near you soon).

Owners of Medieval II and Kingdoms can download Third Age (all 2.9 GB of it) for free. The game, as with the previous editions, allows you to refight the War of the Ring playing as one of the sides of 'good' (Gondor, Rohan, Dale, the Silvan Elves, the High Elves, the Dwarves or Eriador/Arnor) or 'evil' (Mordor, Hard, Rhun, Isengard, Orcs of the Misty Mountains, Orcs of Gundabad) across a gorgeously 3D-rendered map of Middle-earth.

Version 2.0 introduces several new features to the game. People were disappointed with Eriador in the previous version of the game. True to the books, Eriador was a hodgepodge faction consisting of disparate forces (the Hobbits of the Shire, the Rangers, the townsfolk of Breeland and so on) and as such did not field a particularly formidable army (despite the terror-inducing sight of its, er, Halfling Archers). The new version allows an 'Arnor emergence' mechanic, where Aragorn, instead of claiming the throne of Gondor as in The Lord of the Rings, instead re-founds the Dunedain North Kingdom of Arnor to replace Eriador. Arnor is a much more formidable faction with units more comparable to Gondor's, making them a more viable playable faction.

More intriguingly, the new version features a 'Fellowship' mechanic which allows you to follow the Fellowship of the Ring's route and adventures. How on Earth it does this given the limitations of the Total War engine is unknown (I'm still downloading the thing), but it'll be interesting to see how it works.

It's not all good news, however, as the Orcs also get an additional faction (the Orcs of Gundabad and the Grey Mountains) and a new, possibly familiar general unit: 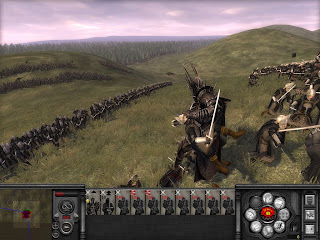 "I SEE YOU. And therefore can punch you in the face!"
The game is available to download from the link at the top of the post now, but you need both Medieval II and Kingdoms installed to play.
Posted by Adam Whitehead at 21:55