For long years the game of foot-the-ball has been played in the back alleys of Ankh-Morpork, with teams formed from street communities coming together in sporting comradeship (involving violence and pies, not necessarily in that order). But the game is starting to turn ugly, and in the spirit of maintaining civil order the Patrician has decided to make the game legitimate, with professionally-organised teams and codified rules. The wizards of Unseen University are invited to form a team and Archchancellor Ridcully enthusiastically agrees, with new staffmember Mr. Nutt proving an invaluable asset. But the old street game isn't going to die peacefully... 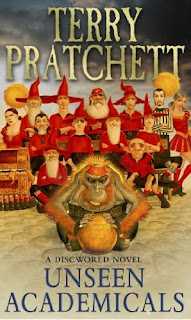 Unseen Academicals is the most recent novel in the Discworld series and, at around 530 pages, is also the longest. It's also one of the more unfocused books in the series, with lots of excellent ideas which Pratchett is unable to bring together with his customary cleverness. For example, we are given two different reasons why UU has to form a football team. As well as the general sense of civic duty as the Patrician attempts to legitimise the game, we also have a requirement in the will of a deceased wizard whose money is funding the UU kitchens that the university has to field a football team or lose his money (and thus their food). This is an amusing idea, but also unconvincing and, after it is initially brought up, is promptly dropped.

Thankfully, for those who are not big fans of football, that element of the novel soon drops into the background, with Pratchett focusing most of the action on the character of Nutt and his enigmatic background. Nutt makes for a likable protagonist, but the revelation of his backstory lacks punch, mainly because with so many other formerly-considered-evil creatures now living in Ankh-Morpork, the addition of one more is not particularly notable. Glenda, the other main protagonist, is also interesting but there is little to distinguish her from Pratchett's other stoic, brave and resolute female protagonists. She is no Granny Weatherwax or Susan, that's for sure, but is likable enough.

The book also has its funny moments, with Ridcully given a new nemesis in the shape of his former Dean, who has 'betrayed' UU and become Archchancellor of Pseudopolis's magical academy, and the arrival of a flamboyant Genuan wizard who becomes the UU team's star striker, but it is definitely light in the out-and-out laughter stakes compared to many of the other volumes in the series. 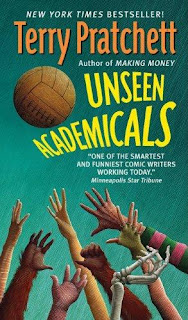 Where the book does excel is in its worldbuilding. Ankh-Morpork has been the greatest fantasy city ever created for some considerable time, but here it gains additional depth as Pratchett delves into the social history and relationships of different communities amongst the common folk of the city and the world of servants below stairs at UU, and we get some nice additional insight into how the Patrician rules and orders the city so efficiently given its chaotic nature. In addition Pratchett uses his vast existing library of Discworld characters to populate the city, with William de Worde getting his biggest role (although still an extended cameo) since The Truth and the return of Rincewind and his luggage (although again only briefly).

Unseen Academicals (***) is well-written and occasionally amusing, but it is also flabby, overlong and unfocused, with protagonists who are intriguing but unremarkable compared to many others in the series, despite the excellent use of the setting. The book is available now in the UK and USA.
Posted by Adam Whitehead at 09:40