Nine months have passed since the destruction of Windwir. The kingdom of the Ninefold Forest Houses has taken up the mantle of 'the light', the collected wisdom of ancient times, and built a new library to preserve the remnants of what was lost when Windwir fell. However, war and civil war wracks the Named Lands and House Li Tam has sailed into the southern ocean, following a hint that previous events are being orchestrated by a hidden power for their own, inscrutable ends. 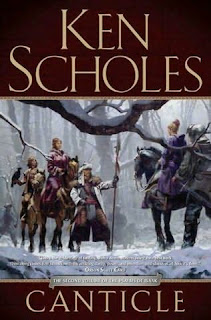 Canticle is the second novel in The Psalms of Isaak series and the sequel to Lamentation, a reasonable debut novel which overcame its lack of depth and polish with fast, readable prose and good pacing. Canticle is a better book, making character motivations considerably more complex and murkier, expanding the world and scope of the story and adding some new factions previously only hinted at in the first volume.

It pains me to say it, but Canticle is also 'darker' than Lamentation, with one of the characters being captured by the shadowy enemy and undergoing particularly grim and unpleasent torture for what feels like half the book. The process adds to the character's development and is somewhat uncomfortable to read, contrasting the first volume's 'safe' feeling that occasionally tipped it too close to the 'bland' end of the spectrum for comfort, although Scholes always steered the story away from that fate.

Some of the issues with the first book remain, such as Jen and Rudolfo being less interesting than most of the remainder of the cast and some story developments feeling mechanical rather than organic. There's also a slight issue with repetitive story structure, with the plot once again hinging on everything our characters knowing turning out to be the result of a masterful secret agenda set in motion decades ago for shadowy purposes. The closing section of the book is also somewhat annoying for suffering from Lost syndrome, with characters resolutely refusing to ask people in the know just what the hell is going on, or if they do remember to do this getting needlessly enigmatic replies. 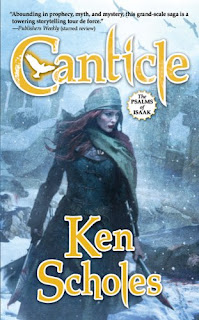 Still, Canticle is a more interesting read than its predecessor. Winters, a supporting character in the first book, becomes a key protagonist here and her journey very well-depicted despite over-familiarity (young female ruler having to overcome inexperience to become a plausible leader). There's also a host of new revelations which continue to show that the series is a post-apocalyptic science fantasy more in line with The Dying Earth and Nights of Villjamur than yet another MOR epic fantasy, which Scholes handles well.

Canticle (****) is an entertaining, effective fantasy novel which builds on the successful elements of Lamentation and eliminates some of its key weaknesses. It is available now in the USA and in the UK on import.
Posted by Adam Whitehead at 16:48

Email ThisBlogThis!Share to TwitterShare to FacebookShare to Pinterest
Labels: canticle, ken scholes, the psalms of issak

Did you read Scholes' "A Weeping Czar Beholds the Fallen Moon" at Tor.com (http://www.tor.com/stories/2009/02/a-weeping-czar-beholds-the-fallen-moon)? Read after "Canticle" it provides some more pieces of background and nicely expands some things that are just named in passing in the books. It's a very good short story by itself, also.