AVATAR: THE LEGEND OF KORRA announced

Nickelodeon have announced Avatar: The Legend of Korra, a new animated 12-episode mini-series which will serve as a sequel to Avatar: The Last Airbender. The name seems to be inspired by the name that the previous series went under in the UK and other countries, The Legend of Aang. 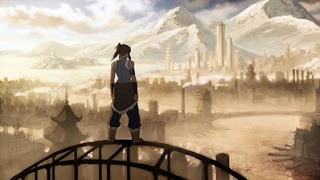 Staring moodily at a distant city from what appears to the be the top of a tiny bridge. Awesome.
The new series will be set in a different time period to the original series and focuses on the emergence of a new avatar (someone who can use all four of the elemental forms of magic), a girl named Korra. The single screenshot revealed hints at a slightly more technologically-advanced time period, with much taller buildings than in the original series, although the traditional Asian influence remains strong. The accompanying press-speak suggests that the series will build on the mythology of the original series with a hotheaded female lead. The series will debut in 2011.

To reiterate, this is a sequel to the excellent, possibly classic, animated series, not the M. Night Shyamalan movie.

UPDATE
More detailed information has emerged. The Legend of Korra is set seventy years after the conclusion of Avatar: The Last Airbender. Korra, a member of the Southern Water Tribe, is already the Avatar when the series starts and has mastered three of the four elements, leaving only airbending unmastered. She is looking for Tenzin, the son of Aang (and presumably Katara), who will teach this skill to her. A principle location will be Republic City, a metropolis powered by steampunk technology which is riddled with crime and where the people, a mix from all four nations, are becoming disenchanted with magic-users in general.

This sounds more hopeful. A rebellion of the 'normal' people against all of the magic-users and more focus on one location sounds like good moves, throwing up good storyline possibilities.
Posted by Adam Whitehead at 14:55

Email ThisBlogThis!Share to TwitterShare to FacebookShare to Pinterest
Labels: avatar: the last airbender, avatar: the legend of korra

Though it will be sad to leave the original characters behind, this does like pretty awesome. It's certain that people will go into this with high expectations, so I hope the producers/creators can make it work. Here's to hoping it will be just as great as its predecessor!

It is interesting. They can't repeat the 'plucky heroes vs evil empire' of the original series, so the premise will have to be engagingly different. Upping the tech level to something more steampunky could be a good and interesting move (unclear if they've done that, but the skyscraper-like buildings in the distance hint at a higher tech level), maybe bringing in a magic vs technology theme?

Presumably Korra can commune with prior Avatars like Aang did, so there's a good chance of an Aang cameo at some point.

Could be, tough there were already some pretty steampunk-like elements in the first series with the Fire Nation ships/weapons and things like the air-balloon Soka helped design in the first season. The to address the tall buildings, there were some pretty tall things in the Earth Kingdom, I'm thinking of Omashu and the walls around Ba Sing Se. Still, a technology vs magic theme would make an interesting mix as long as they can write some stakes/conflicts that make it worthwhile.

From that picture (and I'm probably pushing how much I can draw from it) and what Korra is wearing, it looks like she might be water-tribe, the nation probably covered the least in the original series despite having many of the main characters from there. Adding Aang cameos would one, be awesome, and two, help smooth the transition from one series to the other.

IIRC, there's an order to how the Avatars manifest, and the next Avatar should be (or more accurately, start as) a waterbender, following on from Aang (an airbender) and Roku (a firebender). That to me indicates that Korra is the Avatar after Aang and inherits his mantle after his death decades after the final episode of TLA.

Judging from all the smoke in that picture, maybe there'll be some kind of eco-theme this time?

I hope he's not

Whichever way it goes, it'll be worth keeping an eye on. I'm guessing we'll find out more from comicon?

Also, the setup we know so far is quite similar to the upcoming Golden Sun sequel, in which the original game also had distinct similarities to the original Avatar series (or the other way around, I suppose).

I wonder how Aang died. I mean, how old was Roku before he died? The release from Nick says Legend of Korra will take place 70 years after the last airbender. Aang was technically 112, though forget about the 100 years, cos he was frozen, so he didn't really live through them. So let's say 12. That means, 70 years into the future he'd be 82. But Korra is probably, let's say 16 or 15, since she's a teenager, and the next avatar is born after the previous one dies, and not before. So Aang would have died when he was about 67 or 66. That's too young for an avatar to die of old age. Hmm ... I smell a good storyline here. Can't wait!

A squeee of glee just escaped in a profusely embarrassing manner. First time I have EVER been this excited over a children's show.

Cheers for the news, Mr. Whitehead.

It's possible Aang died before his time (and intriguingly the time period is just short enough that Katara, Sokka, Toph, maybe even Zuko could all still be alive, if very old). That's somewhat dark for the series, but it is mitigated by Aang continuing to live in the memories of the next Avatar, as Roku survived in his.

I just had to change my jocks. Squeeeeeeeee!!!

Cant wait for this one! I was terribly disappointed with the movie.. I'm hoping they make "easter eggs" and/ or references to the original series. :)

I really loved the first series. It had a lot of childish things in it, but the background and the moral was pretty deep. Thumbs up for a show that is accessible to little children and also has deep meaning, without teaching them to destroy in rage everything that stands in their way.

Because I liked the series so much I didn't watch the movie (yet)... I hope the new series is of the same quality.

I heard that it was going to be a more mature show for the older fans of Avatar. I'm really excited to see what this "more mature content" is like!

i read somewhere else that the writers didn't want TOO mature themes because they wanted to keep the same elements and attitude from he original series. they promised that the mini series will still have the same humor, wits, and similar internal/external conflicts as ATLA. in addition they noted that Legend of Korra will be closely tied to ATLA, aka cameos and references; seeing Aang is bound to happen.

It will be so cool!I can't even believe Aang has a son! But I do want Toph to be there but I guess she's quite old then.:( Though still Im so excited to watch the new series!!

does anyone knows when this series is releasing

It's been held back to Summer 2012, unfortunately.