AD 2352. Humanity is divided into two factions, the Company which rules over Earth and the Sol system, and the Union, which rules over the outer colonies and worlds. In between are a narrow band of independent stations, nominally loyal to the Company but open to all traders and merchants. For years the Company and Union have been at war, but Earth's appetite for conflict is dwindling. In the end they have withdrawn practical support for their offensive fleet under Captain Mazian, leaving him a rogue agent whose goals and loyalties are suspect. 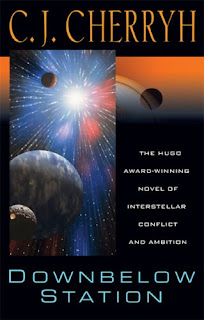 Caught in the middle of these turbulent times is Pell Station, circling the planet Downbelow in the Tau Ceti system. The closest independent station to Earth, it is a logical place for refugees from the warzone to flee to, straining resources to the limit. The Konstantin family which controls Pell Station struggles against the competing demands of Mazian's fleet, the refugees, the station's existing complement and the Company, and must also guard against infiltration from the Union, whose vast resources are finally gaining the upper hand in the conflict.

Downbelow Station was originally published in 1981, winning the Hugo Award for Best Novel the following year. It seems to be regarded as the best entry-point for Cherryh's Alliance-Union setting, a vast future history spanning centuries of mankind's expansion into space and its division between different factions, and the various conflicts it faces. The setting encompasses several dozen novels published out of chronological order and divided into confusing sub-series, making it perhaps the serious SF counterpart to Terry Pratchett's Discworld work in being slightly daunting for newcomers. Luckily, Downbelow Station makes a solid starting point for those interested in exploring the setting.

The novel's setting is classic space opera. An opening prologue sets out the history of humanity's expansion into space and the background of the Company Wars before we are dropped straight into the action, with the personnel of Pell Station, the mining settlement on Downbelow and the carrier Norway all struggling to handle the refugee crisis. Cherryh successfully gives the impression that this is an ongoing story and history, where we are simply dropping in to observe a crucial moment and are then pulled out again at the end. This process works quite well.

Overall, the book is solid, with some interesting characters who are drawn with depth, but where what is left unsaid about them (particularly Mazian, Mallory and Josh) is as important as what is. There's also a nice inversion of cliche, with an initial figure who appears to be the typical bureaucratic buffoon is later revealed as a more intelligent and interesting character. There is also a fair amount of ruthlessness in the book, with major characters disposed of with little forewarning, but also a reasonable amount of humanity and warmth. Cherryh has a reputation for creating interesting alien races, and whilst the native 'Downers' of Downbelow are initially simplistic, they rapidly become better-drawn as the story proceeds as their full potential emerges, even if they're not really all that 'alien'.

On the minus side, after the initial burst of action accompanying the refugee fleet's arrival, the novel takes a good 200 pages or so to fully work up to speed. During this period the book becomes bogged down in Cherryh's sometimes odd prose and dialogue structures (terse, short sentences short on description are favoured throughout). The lack of description extends to the worldbuilding and even space combat. We are given very little information on what weapons the ships use in battles (mentions of chaff suggest missiles, but we are never told that for sure), whilst the economic structure of the merchant ships and the independent stations appears under-developed. Those used to the immense, Tolkien-in-space-style SF worldbuilding of modern SF authors like Peter F. Hamilton and, to a lesser extent, Alastair Reynolds, may find the thinness of the setting somewhat unconvincing (at least at this early stage). In addition, Cherryh's use of technology is somewhat inconsistent. None of the humans use implants, there are no AIs or robots, and everyone taps commands manually into computer consoles, yet at the same time there are also sophisticated memory-altering techniques and FTL drives.

Downbelow Station (***½) is ultimately a good novel and an intriguing introduction into what could be an interesting SF setting. However, it suffers from occasionally obtuse writing and some unconvincing worldbuilding, and it certainly isn't better than The Claw of the Conciliator, The Many-Coloured Land and Little, Big (the books it trounced to win the Hugo). The novel is available now in the USA, but has no current UK edition. Imported copies are available via Amazon.
Posted by Adam Whitehead at 16:26

I've never been able to get into Cherryh's work (her novel The Paladin and her Theives' World shorts) for the same reason you list here: the terse, rather flat prose style.