The Galaxy is in a state of turmoil. Millions of members of the Living Dream movement are preparing to plunge into the enigmatic Void at the heart of the Milky Way, believing it will deliver them to paradise. Others fear it will destroy the Galaxy altogether. The Ocisen Empire has allied with humanity's most remorseless foe to avert this fate, forcing the Commonwealth to unleash its most powerful weapon in response. But this very eventuality appears to have been prepared for by factions within the Commonwealth eager for the Living Dream to succeed... 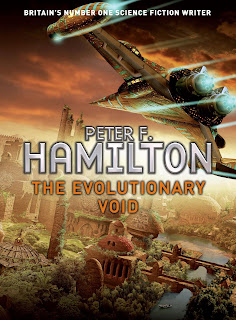 Within the Void, Edeard has mastered his formidable new powers and sets out to deliver peace and justice to the world of Querencia. But for every problem he solves, more and more appear, and it may be that the Void's greatest gift is also its most horrific curse.

The Evolutionary Void is the conclusion to The Void Trilogy and also wraps up almost all the remaining plot threads from the earlier Commonwealth Saga. It is a generally satisfying finale that answers all the major questions remaining from the previous four books in both series whilst delivering Hamilton's trademark, widescreen space opera spectacle married to some solid, hard science and some interesting themes on growth, evolution (biological and sociological) and change, and the risk of ennui.

Structurally, the book is similar to the previous two, with alternating sequences set in the Commonwealth and in the city of Makkathran in the Void. The Makkathran sections are downplayed this time around, as Edeard's story really climaxed at the end of The Temporal Void. Evolutionary explores the ramifications of his discoveries at the end of the previous volume and adopt an almost Groundhog Day-style aspect, as Edeard's apparently godlike powers are now revealed to be anything but, and all the power in the world does not help if you cannot wield it responsibly. 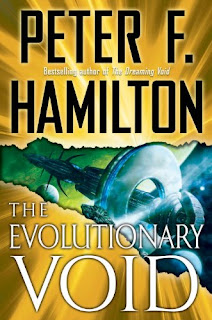 In the Commonwealth, a large cast (although fairly modest compared to some of Hamilton's previous work) of well-drawn characters works to resolve the threat to the Commonwealth. Along the way they suffer some serious reverses. One brilliant sequence harkens back to Pandora's Star and is extremely impressive in how Hamilton sets up and executes it. Hamilton's ability to deliver good space battle has also not faltered.

The book's finale is epic, impressive and exceedingly clever (although a "Hang on, you didn't work this out ages ago?" line was possibly a little too meta for comfort). As far as his major series goes, this may be Hamilton's best-executed conclusion to date, although it does share some similarities to both The Naked God and Judas Unchained, including some elements that I know people disliked about both. The ending is also a little too neat. Pretty much everything is wrapped up with a nice bow at the end, and, sure enough, the biggest unanswered question will apparently form the basis of a new trilogy which Hamilton will start releasing in about three years.

The Evolutionary Void (****½) has some minor issues but is overall a solid conclusion to the series (both the trilogy and the larger five-volume Commonwealth story). It will be published in the UK on 10 September 2010 and in the USA on 24 August.
Posted by Adam Whitehead at 15:35

You lucky bugger Wert, I cant wait until September to get my hands on this so looking forward to it.

I'm glad the Edeard thread seems to be in the minority in this last book because I found it slowed the other two up for me.

What's the trilogy that's coming out in 3 years? What happens with Edeard and Salrana?

Or the Ozzie and Nigel Sheldon thread? I'd love to read series about what happened to Nigel.

I actually wasn't that impressed with the third book at all. I really don't see these as very connected to Pandora's Star/Judas Unchained, which I think are great.