Nu Boyana Film Studios has recently wrapped production on the new Conan movie, directed by Marcus Nispel and starring Jason Momoa as the titular Cimmerian. They released the first official still from the movie yesterday: 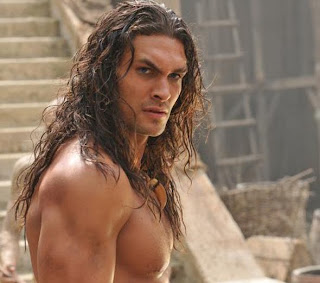 "Arnold who?"
Momoa is best-known to genre fans due to his four-year stint as Ronon Dex in Stargate Atlantis and is playing the role of Khal Drogo in HBO's Game of Thrones, which starts shooting in late July. Looks like Momoa's already looking the part of the Dothraki warlord.
Posted by Adam Whitehead at 22:19

Email ThisBlogThis!Share to TwitterShare to FacebookShare to Pinterest
Labels: a game of thrones (TV series), a song of ice and fire, conan the barbarian, george r.r. martin, hbo, news

I'm a big fan of the original (not the Destroyer, which ironically destroyed the franchise)even though it wasn't true to the novels, but he looks pretty good as Conan. Has the furrowed brow befitting a Cimmerian

He looks like Conan with a pouch belly. But eh, anyway. Having peeked at the leaked screenplay however, I must say I've very low expectations for this to represent anything from Howard's world faithfully.

I'm not convinced, he looks a bit weedy and whats with the hair, styled and gelled!! Did no none know how to do a square cut mane?

Supposedly the producers killed Conan's signature square-cut mane because they didn't think it looked "cool". Which is too bad because I suspect putting an accurate Conan on-screen probably would have looked authentically cool in that nonconformist kind of way, but then this movie isn't going to be any good so why bother getting worked up about it?

I worry that its going to be pants as well, of all the enemies Conan has faced who do the producers & writers choose for him to face? None of them, they invent a totally new one.
W....T....F!

It may well be pants but I can see this being a DVD night in back to back (oh, I'm getting a bit flustered) with Beastmaster and lots of pink wine.