Late-1980s cartoon series Thundercats is the latest franchise to get a 21st Century revival, following on from Transformers and G.I. Joe. Rather than a big-screen revival, Thundercats is returning as a new, weekly animated series from the makers of the new Batman cartoons is promised to be 'grittier', which hopefully means that Snarf dies in the first episode. Promo art below: 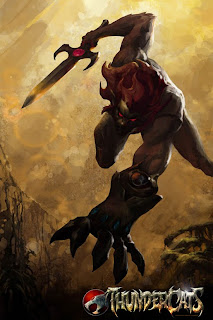 No word on if the next incarnation of Care Bears will likewise be 'grittier' (we find out Grumpy Bear's wife is cheating on him, hence why he's so grumpy, and Funshine Bear is now on crack cocaine).

Update: amusing mistake in the article:

Lion-O, Mumm-Ra, Panthro, Cheetara and others will spring off the screen with realistic cat-like characteristics inconceivable in previous incarnations

Wasn't Mumm-Ra a giant mummy and therefore not really in need of any realistic cat-like characteristics?
Posted by Adam Whitehead at 19:48

It's very cool news. Voltron is also getting re-made (http://www.darkhorizons.com/news/17430/tv-news-voltron-dexter-rubicon).

I read the Voltron script that was out a few years ago and didn't like it at all (same with the He-Man one) so I hope they stick to just serialised cartoons rather than live action films, they don't always translate well enough.

I just want to state something, Transformers out of all of these series, never really went anywhere.

It's been pretty much a constant since 1984, not counting a year and a half hiatus in the US in 1991. They simply are now hugely popular again.. whether they are more popular now than they were in the 80's though would require more statistical data than I have.

Though after having seen Revenge of the Fallen, I wish the line had died in 1991.

G.I.JOE was hit or miss throughout the 90's, in the early 2000's they started up new lines of the Real American Hero line branched out of some recolored toys exclusive to Toys R Us in the late 90's and it's just gone from there.. But it hasn't had a smooth time of it. nearly 6 separate reboots in 5 years.

This isn't also the first time which Voltron was remade either. They tried it once before in the late 90s.

I think it would be fair to say that whilst some of these franchises indeed carried on (or in some cases limped on), they have only recently become part of the cultural zeitgeist again.

TRANSFORMERS, for example, effectively went on hiatus in 1991. 2nd Generation was not a major success, and it wasn't until BEAST WARS appeared a few years later that the franchise began to recover. However, I'd classify BEAST WARS as a spin-off, since none of the classic characters feature (Starscream's ghost, a Ravage cameo and Optimus Prime's inert body aside) and the premise was different. Also, the follow-up series (BEAST MACHINES) was not successful. It wasn't until 2002 or so when new comics and graphic novels started appearing that it began to grow again, culminating in the 2007 movie.